Nobody Seems To Really Know What Brought Down Russia's Plane 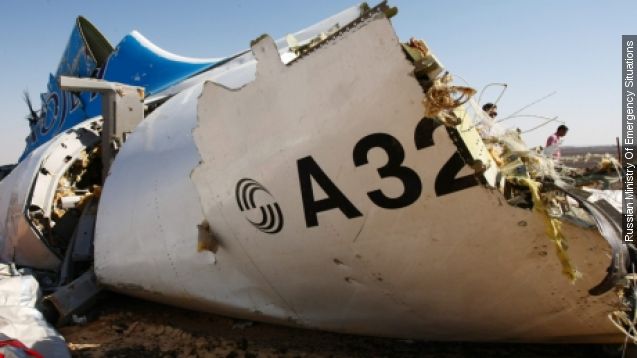 There's been some back-and-forth on figuring out what brought down a Russian Metrojet flight over Egypt that killed 224 people.

President Obama told KIRO in a radio interview, "There is a possibility there was a bomb on board."

British Prime Minister David Cameron has said it's "more likely than not" that it was a bomb, though he doesn't know for certain.

But the U.S. State Department said it's not ready to call the disaster a terrorist attack just yet.

And both Egyptian and Russian officials have said there's not any evidence so far that it was a bomb.

So, what caused the crash? No one seems to know. Aviation officials are still examining the black boxes from the crash. (Video via Al Jazeera)

What we do know is that, on the day of the crash, an ISIS affiliate in Sinai claimed credit for bringing down the plane. While the group hasn't elaborated on how it took down the plane, it has repeated the claim since then, telling disbelievers to "die in their rage."

Egyptian and Russian officials have avoided any mention of ISIS or terrorism for now. That might be because both governments stand to lose if the crash is linked to terrorism. (Video via ONTV)

An attack on Russian civilians could dampen domestic support for the country's ostensibly anti-ISIS bombing campaign currently underway in Syria. (Video via Russian Ministry of Defense)

And fears of a similar attack could hit Egypt's vital tourism industry hard. Britain has already halted flights to southern Sinai and promised to evacuate tourists in the region. (Video via Al Arabiya)

That decision could strain relations between U.K. Prime Minister David Cameron and Egyptian President Abdel Fattah El-Sisi, who are meeting in London this week. (Video via Euronews)

This video includes images from the Egyptian Civil Aviation Ministry and the Russian Ministry of Emergency Situations.