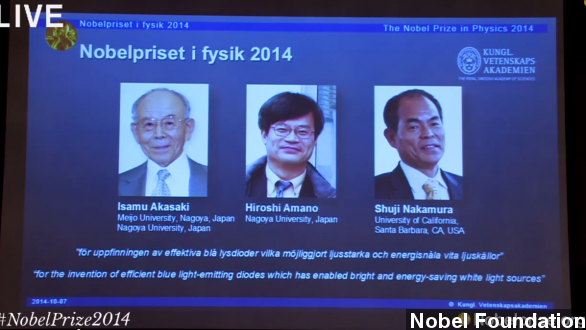 By Sebastian Martinez
October 7, 2014
A trio of Japanese scientists have been awarded the Nobel Prize in Physics for their work on the blue LED, which could revolutionize lighting.
SHOW TRANSCRIPT

The prize was awarded to a trio of Japanese scientists who in the 1990s developed the blue LED, which, when combined with red and green LEDs led to white LED light. (Video via Nobel Foundation)

That enabled the use of LED lighting to light homes, which could greatly reduce energy consumption, as LED lights last much longer and are much more efficient than traditional lightbulbs. (Video via American Lighting Association)

The initial invention of the high-brightness blue LED is credited to Professor Shuji Nakamura, who developed it at Nichia Corporation in Japan, one of the world's largest manufacturers of LED lights. (Video via Lux Magazine)

That invention was preceded by fellow laureates Isamu Akasaki and Hiroshi Amano's invention of the original — non-high-brightness — blue LED at Nagoya University.

Nakamura's compensation for his invention led to a legal conflict with Nichia Corporation, which was ultimately forced to pay him some $8.1 million in compensation back in 2005.

Nakamura eventually left Japan and gained American citizenship, which led a number of American outlets to describe the prize's announcement Tuesday like this.

WKBW: "The Nobel Prize in physics has been awarded this morning, it's gone to two Japanese and one American scientist."

WRC-TV: "An American scientist is among the recipients of this year's Nobel Prize in physics."

Anyway, if you need proof of the wide reach of Nakamura's invention, and you have a smart phone, the light it uses as flash for your pictures or as a flashlight comes from that combination of red, blue and green light. Nakamura, Amano and Akasaki will share the $1.1 million prize.