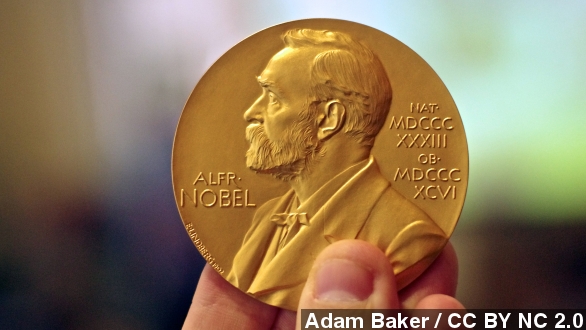 By Sebastian Martinez
October 8, 2014
The three scientists honored with the Nobel Prize in Chemistry have spent their careers trying to look at the smallest things they could.
SHOW TRANSCRIPT

Three men have won the Nobel Prize in Chemistry for their big ideas about very, very small things.

Americans Eric Betzig and W. E. Moerner, and German Stefan Hell were named as the winners on Wednesday for their work on microscopy — getting clear images of the tiniest things. (Video via Nobel Foundation)

Specifically, the three have worked toward getting images of individual molecules — with Moerner being the first to do it, in 1989, and Betzig and Hell developing the technology even further. (Video via Washington University in St. Louis, Molecular Frontiers, SPIETV)

Working independently, the three were able to surpass what was thought to be the physical limit of microscopy, established in 1873. They got better resolution images of things at a molecular level than anyone ever had before. (Video via ESRIC Microscopy)

There are a couple ways the laureates were able to get around that limit, but they all have to do with light.

Betzig focused his research on stimulating certain proteins to get them to light up — fluorescence — and produce an image on a scale of nanometers — 1/1000 of a micrometer. He even quit his job and worked from his living room. (Video via iBiology)

Stefan Hell, on the other hand, has worked on making the light used to elicit that fluorescence as pinpoint as possible, by surrounding the exciting light — which causes fluorescence — with another light, to focus it further. (Video via Leica Microsystems)

Moerner, who is currently the chair of Stanford's chemistry department, opened the door for both of them by combining different types of modulations to isolate a single fluorescent molecule for the first time back in 1989.

These technologies are especially impressive because they're able to get those molecular images — of cells and bacteria and viruses — in motion and alive, whereas before a bacterium would have to be killed and broken apart to get a detailed look at it. (Video via Zeiss Microscopy)

If that seems a bit like science fiction to you, you're not alone. Look how the chairman of the prize committee described it.

SVEN LIDIN, NOBEL FOUNDATION: "They can be studied in real time, while they live long and prosper."

What that means from a practical standpoint, as the Nobel Foundation pointed out in its announcement, is possible medical breakthroughs as scientists can now "track proteins involved in Parkinson’s, Alzheimer’s and Huntington’s diseases as they aggregate..."