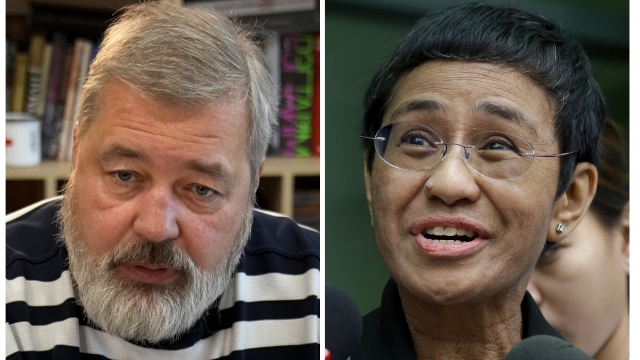 Journalists Maria Ressa and Dmitry Muratov won the Nobel Peace Prize for risking their lives in the name of press freedom in the Philippines and in Russia.

More than 270 journalists were behind bars last year worldwide, according to the Committee to Protect Journalists. It's the highest number in three decades.

This grim statistic helps us understand the significance of this year's Nobel Peace Prize.

The Norwegian Nobel Peace Prize committee decided to honor the work of the two independent reporters at a time of increased authoritarianism and misinformation.

Ressa is the CEO and co-founder of Rappler, a leading investigative website in the Philippines.

"This is for you, Rappler," Ressa said, "and I hope energy for all of us to continue the battle for facts."

She has exposed government corruption and extrajudicial killings and has faced the wrath of autocratic President Rodrigo Duterte in return.

She is facing prison time for libel and tax evasion — charges she describes as politically motivated.

But now she hopes her Nobel victory will help turn the tide.

"I hope today's Nobel Peace Prize 2021 award will remind the authorities in the Philippines, Russia, around the world of the need to respect journalists and journalism."

Dmitry Muratov, the other winner, has been fighting for journalism freedom for decades in increasingly hostile Russia.

"When civil society is given open and truthful information, it starts to demand certain measures from the authorities," he said.

He's been leading the independent newspaper Novaya Gazeta since 1995.

Six of his staff members have been killed over the years, yet his paper continues to survive.

"It will protect us," he said.

His colleagues hope the prize will prevent more violence against them — and protect them from being classified by the Kremlin as foreign agents.

Press advocates around the world celebrated the announcement Friday, hoping the prestigious recognition of two journalists would bring urgency to the growing threats to journalism.