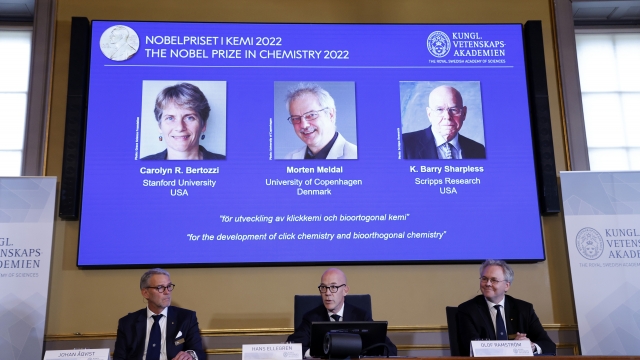 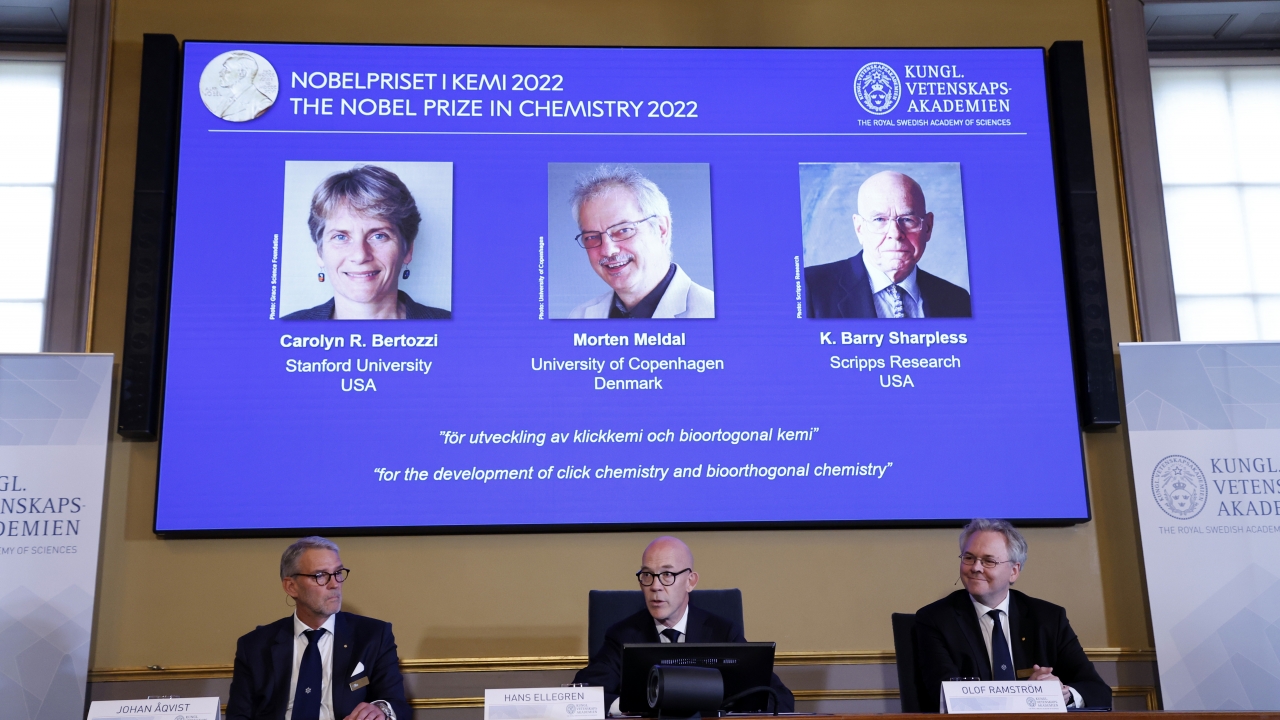 Three scientists were jointly awarded this year's Nobel Prize in chemistry on Wednesday for developing a way of "snapping molecules together" that can be used to explore cells, map DNA and design drugs that can target diseases such as cancer more precisely.

Americans Carolyn R. Bertozzi and K. Barry Sharpless, and Danish scientist Morten Meldal were cited for their work on click chemistry that works "sort of like molecular Lego."

"It's all about snapping molecules together," said Johan Aqvist, a member of the Royal Swedish Academy of Sciences that announced the winners at the Karolinska Institute in Stockholm.

Sharpless, 81, who previously won a Nobel in 2001 and is now the fifth person to receive the prize twice, first proposed the idea of connecting molecules using chemical "buckles" around the turn of the millennium, Aqvist said.

"The problem was to find good chemical buckles," he said. "They have to react with each other easily and specifically."

Meldal, 68, based at the University of Copenhagen, and Sharpless, who is affiliated with Scripps Research in California, independently found the first such candidates that would easily snap together with each other but not with other molecules, leading to applications in the manufacture of medicines and polymers.

Bertozzi, 55, who is based at Stanford University "took click chemistry to a new level," the Nobel panel said, by finding a way to make the process work inside living organisms without disrupting them.

The goal is "doing chemistry inside human patients to make sure that drugs go to the right place and stay away from the wrong place," she said at a news conference following the announcement.

The award was a shock, she said. "I'm still not entirely positive that it's real, but it's getting realer by the minute."

Later, speaking to The Associated Press by Zoom, Bertozzi said one of the first people she called after being awakened by the call around 2 a.m. was her father, William Bertozzi, a retired physicist and night owl, who was still awake watching TV.

"Dad, turn down the TV, I have something to tell you," she said she told him. After she assured him nothing was wrong, he guessed the news. "You won it, didn't you?"

One of three daughters, Bertozzi said she was "fortunate because I grew up with parents that were very supportive, evangelical almost, about having their girls participate in the sciences."

Bertozzi, who is paid by the Howard Hughes Medical Institute, which also supports The Associated Press' Health and Science Department, said she was grateful for the energy and enthusiasm that a Nobel Prize win will inject into the field.

Meldal said he received the call from the Nobel panel about half an hour before the public announcement. "They ... told me not to tell anyone," he told the AP, adding that he just sat in his office, shaking a bit.

Meldal started out as an engineer, "but I wanted to understand the world so I thought chemistry would give me the solutions."

Jon Lorsch, director of the U.S. National Institute of General Medical Sciences, which supports the work of Bertozzi and Sharpless, described click chemistry as "sort of like molecular Lego — you have a group on one molecule that specifically attaches to a group on another molecule," like Lego clicking together.

"That makes it possible to attach molecules in very specific pre-defined ways," he said, and gives scientists a very precise tool to build complex new molecules for use in drugs, synthetic materials and other uses.

However, the first iteration of click chemistry could not be used with living cells. "The original click chemistry used copper as a catalyst to join molecules," Lorsch said. "But the trouble is that copper is toxic to most living systems at higher concentrations."

Bertozzi then devised a way to jumpstart the reactions without copper or other toxic solvents — broadening the applications to human and animal tissues.

"Being able to work without dangerous solvents, opened many new doors — it enabled scientists to work on new types of reactions that actually take place within the human body," said Angela Wilson, president of the American Chemical Society.

That has allowed scientists to attach dyes to cancer cells to track their movements and analyze how they differ from healthy tissue.

Wilson believes the advances of this year's Nobel laureates "will allow more individualized medicine in the future because we can really track things much better within the human body."

Sharpless credited his passion for looking for the impossible and not accepting limits for helping him stumble upon his discoveries.

"I'm just really lucky to have a photographic memory and love the periodic table," he told a virtual news conference from his home in the San Diego suburb of La Jolla. "Prizes aren't what I'm doing science for. ... I have to do it. It's kind of a compulsion,"

M.G. Finn, a chemist now at Georgia Tech who collaborated with Sharpless on his Nobel-winning work, said click chemistry's use in biology and drug development was still "at its infancy," with more exciting discoveries to come.

It's "very much an opportunity ... when you get this kind of award to argue for our young people to take chemistry as a discipline," he said at a news conference in Copenhagen. "Chemistry is the solution to many of our challenges."

A week of Nobel Prize announcements kicked off Monday with Swedish scientist Svante Paabo receiving the award in medicine for unlocking secrets of Neanderthal DNA that provided key insights into our immune system.

Three scientists won the prize in physics Tuesday. Frenchman Alain Aspect, American John F. Clauser and Austrian Anton Zeilinger showed that tiny particles can retain a connection with each other even when separated, a phenomenon that can be used for specialized computing and to encrypt information.

The awards continue with literature on Thursday. The 2022 Nobel Peace Prize will be announced Friday and the economics award on Monday.

The prizes carry a cash award of nearly $900,000 and will be handed out on Dec. 10. The money comes from a bequest left by the prize's creator, Swedish inventor Alfred Nobel, in 1895.