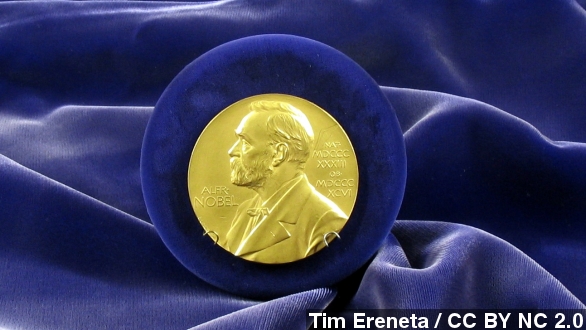 By Sebastian Martinez
October 6, 2014
The Nobel Prize in medicine was presented Monday to a group of scientists who studied how our brain understands where we are.
SHOW TRANSCRIPT

The Nobel Prize in medicine was awarded to three scientists Monday for their work determining how the brain perceives places and where we are.

The ceremony in Stockholm honored British-American John O'Keefe and Norwegian married couple May-Britt Moser and Edvard Moser. The three have worked on what's being described as the brain's inner GPS. (Video via Nobel Foundation)

O'Keefe, who is currently based at University College London, has been studying that aspect of the brain — in particular place cells — since the 1970s.

Place cells are neurons that activate depending on where the brain perceives itself to be. So if you move from one place to another, the corresponding place cells will fire.

The way place cells work has been studied extensively in rats, as you can see in this video. The rat's brain is monitored as it travels around a maze, mapping out which neurons fire and when. (Video via Fabian Kloosterman Lab)

May-Britt and Edvard Moser have focused their research on grid cells, which mentally map our environment. So grid cells provide the map, and place cells tell you where you are on it. (Video via Boston University)

EDVARD MOSER VIA NTNU: "The system uses the rat's position and movement, speed, but doesn't care about what it looks like around. It just uses the change in position, just like a GPS."

Later in that video from the Norwegian University of Science and Technology, which is where the two work, May-Britt explains our memories of places and landmarks are then layered over that grid.

As The New York Times notes, the Mosers' discovery of those grid cells came more than 30 years after O'Keefe's original research on place cells, and their combined efforts could have very real medical applications.

"The laureates' findings may eventually lead to a better understanding of the loss of spatial awareness associated with Alzheimer's and other neurological diseases."

As the two discoveries are so closely intertwined, the prize money — about $1.2 million — will be split between O'Keefe and the Mosers.