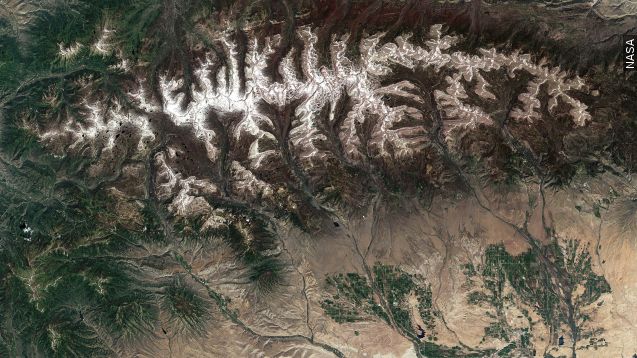 SMS
NOAA Study On Global Warming Hiatus Rubs Many The Wrong Way
By Steven Sparkman
By Steven Sparkman
June 4, 2015
The NOAA's study claiming the pause in warming from 1998-2012 was a data error is being criticized by both mainstream climate scientists and skeptics.
SHOW TRANSCRIPT

Putting climate change research out into the media is a politically tricky prospect at the best of times, but it's an impressive feat when a headline gets both sides to cry foul.

On Thursday, the National Oceanic and Atmospheric Administration released a new study saying the widely-reported slowdown in global warming over the early part of this century never happened. (Video via NASA)

The notion that temperature increases had taken a hiatus came to the forefront in 2013, when the UN's Intergovernmental Panel on Climate Change found that the planet warmed more slowly from 1998 to 2012 than it did in the preceding 50 years.

Both climate scientists and skeptics latched onto the hiatus. For skeptics, it became the go-to fact for making the claim that global warming just isn't happening.

"The climate is not a threat, and it's certainly not an imminent threat. In fact, it's been a decade and a half of a hiatus in global warming, and that is a fact," Fox Business' Eric Bolling said.

For climate scientists, the hiatus was an anomaly to be studied and explained. They found a range of factors that could account for the temperature readings, like stronger South Pacific winds or warming oceans. (Video via Yale University, University of New South Wales, University of Reading)

So you can understand the reaction when the NOAA's lead author said, "The rate of warming over the first 15 years of this century has, in fact, been as fast or faster than that seen over the last half of the 20th century." Of course, the different parties were annoyed for different reasons.

Climate change skeptics and conservative websites accused the researchers of cooking the books. The NOAA "corrected" many past temperature readings to account for what it called "data biases" in how those readings were collected.

And the libertarian Cato Institute said the study's claims were overblown, and the study's own data didn't support the authors' conclusions.

And, on that second point at least, mainstream climate scientists talking to news outlets like Mashable and the Los Angeles Times agreed, saying the NOAA researchers were being misleading.

But there are other scientists who've been criticizing the idea of a hiatus all along, saying it only appears in surface temperature data. Sea levels, ice melt, ocean temperatures and many other measurements show a more or less unbroken upward trend.

And whether there was a pause or not, it's over now: 2014 was the hottest year on record. (Video via NASA)

This video includes images from the U.S. Department of State, U.S. Army Corps of Engineers, the National Oceanic and Atmospheric Administration and NASA.