NOAA Scientists In Standoff With Congress Over Climate Study 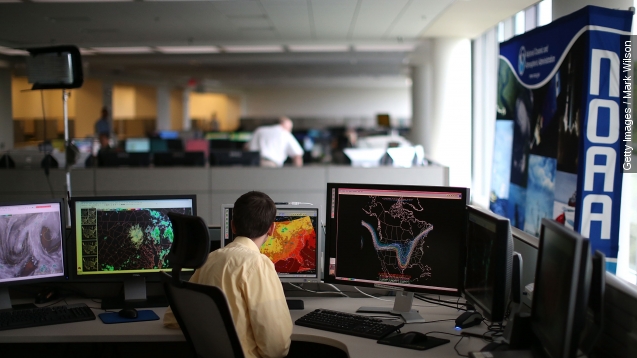 The agency behind a recent controversial climate change study is defying an order to hand over emails to a House investigation. (Video via House Committee on Science, Space and Technology)

"We've now had close to 18 years of no global warming, even though carbon dioxide emissions have increased 25 percent over the last 18 years. Nobody can explain that," Committee Chairman Rep. Lamar Smith said on Bloomberg.

Smith filed a subpoena for any communications related to a study the National Oceanic and Atmospheric Administration put out over the summer, which showed there actually has been warming throughout the 2000s — and a lot of it. (Videos via C-SPAN, NASA)

The researchers have already turned over their data, which was publicly available anyway. But Smith wants to know what the scientists were saying behind the scenes.

Climate change doubters famously got their hands on hacked emails from researchers at the University of East Anglia in 2009. They then argued the emails showed climate change was a hoax and scientists were colluding to sell a narrative.

Smith has similarly accused NOAA scientists of altering their data so that it showed the planet has been warming over the past 15 years, contradicting the so-called "hiatus" doubters have embraced.  (Video via National Oceanic and Atmospheric Administration)

The NOAA scientists adjusted what they said were biases in their data, and laid out their reasoning and methods in the paper itself. (Video via World Climate Research Programme)

But NOAA refused to comply with the subpoena, according to Nature, "because the confidentiality of these communications among scientists is essential to frank discourse among scientists."

Smith argues the agency has no legal footing to refuse the subpoena, but it's not clear what will happen if NOAA continues to defy it.