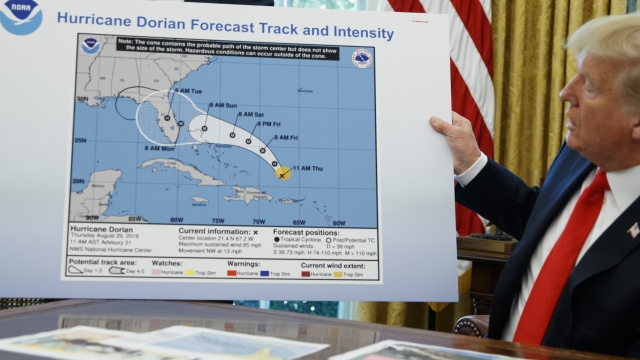 The National Oceanic and Atmospheric Administration says two of its top officials violated its ethics code when they released a statement backing President Donald Trump's claims that Hurricane Dorian posed a serious threat to Alabama.

In the September incident, nicknamed "Sharpiegate," President Trump used a sharpie marking pen on a NOAA map to falsely back his own claim that the category five hurricane would hit Alabama.

In response, the National Weather Service's Birmingham, Alabama office tweeted that the state would not feel any impacts from Dorian because the storm would remain too far east.

NOAA then responded in a statement saying, "The information provided by NOAA and the National Hurricane Center to President Trump and the wider public demonstrated that tropical-storm-force winds from Hurricane Dorian could impact Alabama. ... The Birmingham National Weather Service's Sunday morning tweet spoke in absolute terms that were inconsistent with probabilities from the best forecast products available at the time."

The panel of investigators said Jacobs and Roberts felt pressured to release the statement. They both have said they do not believe they violated NOAA policy.