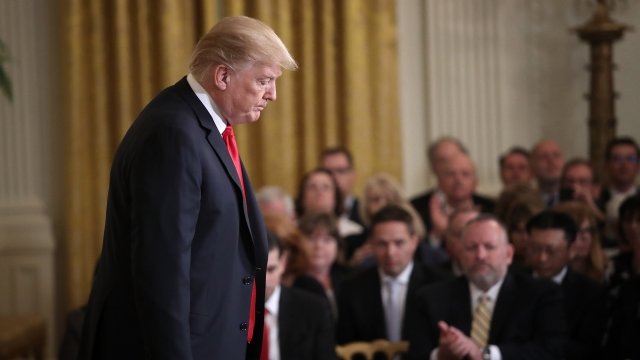 SMS
No, Trump's New Immigration Policy Is Not Like Past Presidents'
By James Packard
By James Packard
June 21, 2018
Some of the president's defenders have tried to equate his policy to those of past administrations. It's not an accurate comparison.
SHOW TRANSCRIPT

In defense of the Trump administration's zero-tolerance immigration policy, some Trump allies have pointed to former President Barack Obama's policies and tried to equate the two when it comes to family separations.

"You know what's ironic? It's the same way Barack Obama did it," commentator Matt Schlapp said on Fox News. "There wasn't outrage over Barack Obama separating kids from adults."

Barack Obama's immigration policy wasn't immune to controversy. And some have argued it was his and his predecessors' policies that led to where we are now. But Obama's policy didn't separate kids from adults at anywhere near the rate the Trump administration's policy does.

In fact, rarely did the Obama administration separate families. And experts say when it did, they were usually reunited fairly quickly once they were identified.

But here's the major difference: Family separations were an exception to the Obama policy. Under Trump, they became the rule, and they were a deliberate component of the policy.

So, yes, family separations happened under President Barack Obama, and his predecessor, too, but it's not accurate to say previous presidents, including Obama, did it the same way as the Trump administration.