No-Knock Warrants Are Still Happening, Even After Multiple Deaths 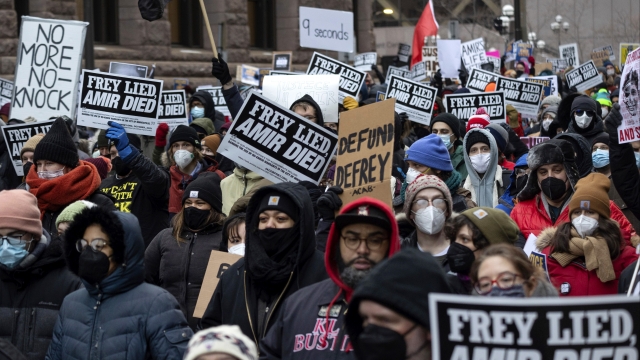 SMS
No-Knock Warrants Are Still Happening, Even After Multiple Deaths
By Newsy Staff
By Newsy Staff
February 23, 2022
Between 2010 and 2016, at least 81 civilians and 13 law enforcement officers have been killed in no-knock raids.

It's been nearly three weeks since Amir Locke was fatally shot by Minneapolis police during what’s known as a "no-knock raid."

Locke was shot and killed by SWAT officers entering the apartment he was staying at, looking for his teenage cousin who was implicated in a homicide. Locke was asleep on a couch when they burst in. Body camera footage shows officers shouting as they enter, identifying themselves, but they seemed to give Locke little time to know who was entering. Footage also shows he had a gun in his hand when he was killed.

From the door opening to the fatal shots, the raid lasts about nine seconds.

His death sparked protests and renewed national attention on the practice of "no-knock raids" or "no-knock warrants." These also came under intense scrutiny after the high-profile police killing of Breonna Taylor in 2020 during a no-knock raid. Lawmakers and activists alike called to end the practice.

But two years later, and now with the death of Amir Locke, how much has actually changed?

First, let's define what constitutes a no-knock warrant. Here's Dr. Tom Nolan, who was a police officer in Boston for almost 30 years and now teaches criminal justice and police ethics at Emmanuel College.

A no-knock warrant, or a "quick knock warrant," is used to bypass this rule and cut that waiting time after announcing their identity. It's for situations where officers are expecting armed resistance or worried about evidence being destroyed, and these warrants used to be quite rare.

"During the 1980s and the 1990s, in the early 2000s, when we were full-out prosecuting the quote unquote 'war on drugs,' they became more commonplace," Nolan said. "It was just an assumption that where you see drugs, you're going to see firearms. I was never in a drug unit, but four officers and detectives who were assigned to drug investigations, they would execute no-knock search warrants fairly regularly."

During the so-called "War on Drugs," many media reports, government accounts, and statutes asserted or presumed a link between drugs and violence.

Former President George H. Bush once said, "It could easily be heroin, or PCP. It's as innocent looking as candy, but it's turning our cities into battle zones."

Law enforcement grew more militarized in weaponry and tactics, and there was a sudden growth of funding for narcotic units. SWAT team raids had shifted from exceptional cases like hostage-taking and terrorism, to these no-knock raids for suspected drug possession cases.

Paramilitary police raids ballooned from around 1,500 a year in the early '80s, to an estimated 80,000 per year in the last few years. A whopping 80% of SWAT or paramilitary raids were conducted specifically with no-knock or quick-knock warrants for drug cases.

"So usually the residents or the occupants of the home are asleep," Nolan said. "These warrants are executed in the early morning hours, as was the case in Minneapolis, and we hear a lot of screaming and shouting. And in many ways, that's the intention... to confuse people, to disarm them, to intimidate them. So those are the kinds of outcomes, tragic outcomes, that happened not infrequently with the execution of these types of warrants."

An investigation by The New York Times found that between 2010 and 2016, at least 81 civilians and 13 law enforcement officers were killed in no-knock and quick-knock raids. Many more were seriously wounded, including the infamous case in Georgia when an infant sustained extensive injuries after a flash-bang grenade landed in his playpen. And these no-knock raids seem to disproportionately target people of color.

The killings of Amir Locke and Breonna Taylor are perhaps the highest profile recent cases. So, what has happened since Taylor's killing received major attention in 2020?

A number of cities have passed legislation banning no-knock or quick-knock warrants, including Breonna Taylor's hometown of Louisville, Kentucky. So far, only four states prohibit the warrants.

"We're moving away from a situation where simply having this hunch that I might get hurt and that they might dispose of evidence is no longer going to be sufficient for the issuance of a no knock warrant," Nolan said.

Back in Minneapolis, Mayor Jacob Frey tried to limit the use of these warrants in 2020, including banning their use in drug possession cases for personal use. While some believed they would only be used in extreme situations, a year later, the department still issued at least 90 no-knock warrants, which raised some eyebrows. City officials claim not all warrants were carried out and that the process was indeed made safer.

Now, after the death of Amir Locke, Mayor Frey has placed a temporary moratorium on all no-knock warrants, except for in extreme cases like hostage situations.

But some advocates say legal bans alone might not end the threat. There's a gray area between probable cause for entry without a warrant, and a supposed "no-knock warrant." Cops can still claim to hear weapons being readied, or the sound of evidence being destroyed, relatively easily.

So advocates say other types of reform are needed to really end these raids, or perhaps a rethinking of the militarization of police in low-level drug cases altogether.

"Law enforcement is going to be resistant to this," Nolan said. "They see this as a tool that is indispensable to to their continued need to execute search warrants for drug related offenses. I think it's unfortunate that we only have these types of conversations and difficult discussions after young Black men are killed by the police."