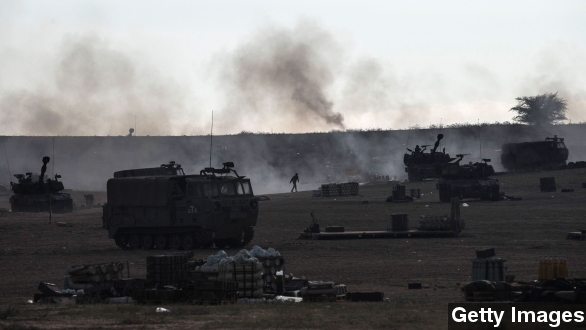 By Ben Lawson
July 26, 2014
A new cease-fire remained up in the air early Sunday as Hamas held off on responding to a U.N. request.
SHOW TRANSCRIPT

Israel has agreed to a United Nations request for a 24-hour cease-fire in its ongoing conflict, but, as of Saturday evening, Hamas has not yet announced if they'll accept the terms.

Israel has agreed to halt its attacks as long as it's allowed to continue destroying a series of underground tunnels that allow militants from Gaza to cross into Israel. (Via Israel Defense Forces)

A Hamas spokesman told CNN the group is considering the terms but has not yet accepted.

Israeli Prime Minister Benjamin Netanyahu is facing intense international pressure to end what has been an extremely violent conflict. So far, at least 42 Israeli soldiers have been killed, as have 1,139 Palestinians, mostly civilians. (Via Getty Images)

On Thursday a shell struck a U.N. school filled with Palestinian refugees, many of whom were children. At least 16 were killed. (Via NBC)

The New York Times writes that Netanyahu is stuck between international cries for peace and calls from home to finish the job he started. Some of his top officials are reportedly calling for a full takeover of Gaza, which the prime minister opposes.

U.S. Secretary of State John Kerry recently traveled to Israel to push a week-long cease fire, which was unanimously rejected by Israel's security cabinet. (Via PressTV)

A writer for Haaretz heavily criticized Kerry's proposal. "The document placed Israel and Hamas on the same level, as if the first is not a primary U.S. ally and as if the second isn't a terror group which overtook part of the Palestinian Authority in a military coup and fired thousands of rockets at Israel."

Israel says it's open to a cease-fire but warns it is prepared to retaliate if the terms are broken.