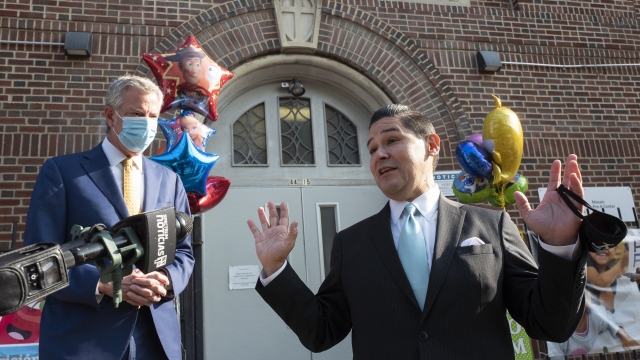 Just days before schools reopen, a union of New York City school administrators is calling for Mayor Bill De Blasio to give up his power over the city's Department of Education.

The Council of School Supervisors and Administrators — which represents principals and assistant principals —declared a unanimous vote of "No Confidence" for De Blasio and Chancellor Richard Carranza. The bargaining unit for about 1,600 school administrators is calling on the state to lead the city schools for the rest of the COVID-19 pandemic.

Just last week, New York schools opened with only a small number of children going back to physical school buildings. This week, students from kindergarten to 12th grade are expected to return to school buildings for in-person classes.

The board said the mayor and the chancellor have not successfully created a safe plan that addresses citywide staff shortages as schools prepare for a hybrid virtual and in-person learning schedule – even with several delays.

In a statement, the union said, "During this health crisis, school leaders have lost trust and faith in Mayor de Blasio and Chancellor Carranza to support them in their immense efforts and provide them with the guidance and staffing they need. Quite simply, we believe the City and DOE need help from the State Department, and we hope that the mayor soon realizes why this is necessary."

A spokeswoman for the New York City Department of Education responded, "This week, more kids will be safely sitting in New York City classrooms than in any other major American city — a testament to city leadership and our educators' commitment to their students."