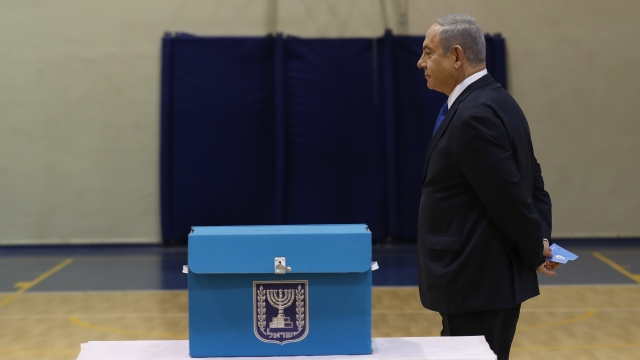 SMS
Israel Exit Polls Show Netanyahu's Party Will Fall Short Of Majority
By Meg Hilling
By Meg Hilling
March 3, 2020
Exit polls show Likud party in the lead, but Netanyahu may not be able to secure the necessary majority in Parliament.
SHOW TRANSCRIPT

Exit polls from Israel's general election Monday indicate that Prime Minister Benjamin Netanyahu's Likud Party is in the lead. However, he may not be able to secure the necessary majority in Parliament in order to head the government.

A ruling party must secure a 61-seat majority. Local TV stations predict Netanyahu will finish with only 59 seats.

This is Israel's third general election in less than a year, with Netanyahu once again facing off against Benny Gantz of the Blue and White Party.

If neither is able to secure a majority, the country could be headed toward a fourth election.

According to local media, the final results are expected to be delayed until late Tuesday because of new procedures for this election.