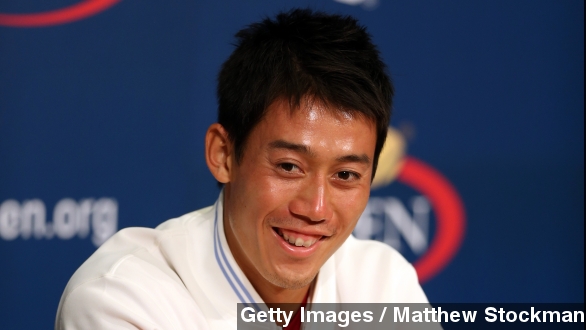 Japanese tennis player Kei Nishikori made history at the U.S. Open Saturday becoming the first man from Asia to make it to the Grand Slam final.

But it's not just that he made it to the finals, it's who he beat that's also getting some attention — the number one ranked men's tennis player in the world, Novak Djokovic.

The 10th seeded Nishikori, who's 24 years old, won in four sets in just under three hours and was quoted by reporters saying he was a "little tight." That apparently didn't stop him from pulling off one of the biggest upsets of the tournament.

Just how much of a longshot was Nishikori's win? Well, Djokovic was the obvious favorite and a Yahoo writer says, "He won here in 2011, has played in the last five finals, and has six other Grand Slam titles on his resume."

But the two had met twice before, splitting the wins. That makes this Saturday's win the second time he's taken down Djokovic.

Nishikori will go on to play Marin Cilic in the finals Monday. Cilic is the winner of another Saturday upset after beating number two seed Roger Federer.