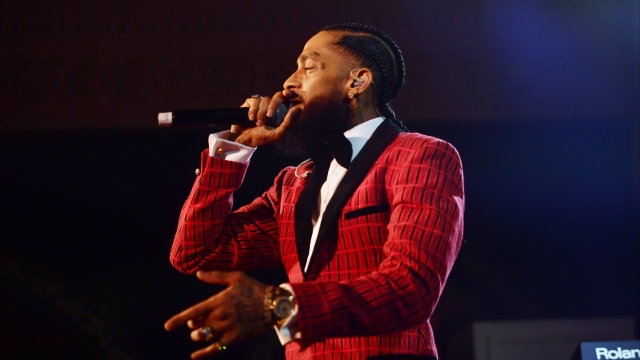 SMS
Nipsey Hussle Shooting Suspect Charged With Murder, Pleads Not Guilty
By Ahmed Jawadi
By Ahmed Jawadi
April 4, 2019
​Eric Holder Jr. has been charged with one count of murder, two counts of attempted murder and one count of possession of a firearm by a felon.
SHOW TRANSCRIPT

The man suspected of killing California rapper Nipsey Hussle has been charged with murder.

The Los Angeles County District Attorney’s Office announced Thursday that Eric Holder Jr. has been charged with "one count of murder, two counts of attempted murder and one count of possession of a firearm by a felon." Police arrested Holder on Tuesday. He made his first court appearance Thursday where he pleaded not guilty to the charges.

Holder is accused of fatally shooting Nipsey Hussle on March 31 outside the rapper’s clothing store in South Los Angeles. The Los Angeles Chief of Police said Tuesday the two knew each other and believe Holder shot the rapper over a personal dispute they'd gotten into earlier that day. Two other men were also wounded in the attack.

According to the Washington Post, Nipsey's death came at the end of a particularly violent week in Los Angeles. The LAPD Chief tweeted that there was a "troubling surge in violence" in the week leading up to Nipsey's killing, in which 26 victims had been shot and 10 were killed.

Holder's next court hearing is scheduled for May 10. If convicted, he faces a possible maximum sentence of life in prison.