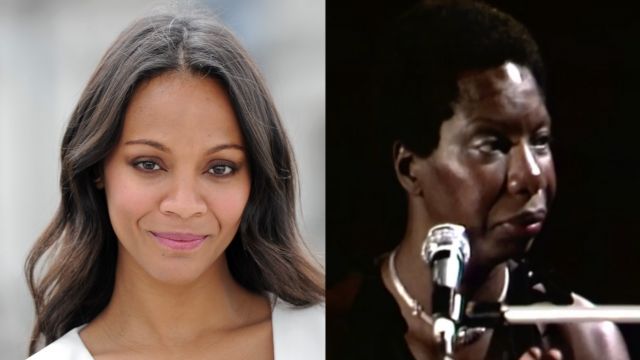 Critics have attacked the creators of "Nina" and Zoe Saldana for her casting as the dark-skinned singer Nina Simone.

The first trailer for "Nina," the Nina Simone biopic starring Zoe Saldana, dropped Wednesday and with it came a fresh round of criticism about what many feel is a role badly miscast.

It should be noted that Saldana is an actress who is black and Latina. But her noticeably darker skin for the role has been called "blackface," a "costume" and an example of "light-washing."

Saldana's been facing criticism since it was announced in 2012 she'd portray the iconic Simone. And since then, she's defended her involvement.

The only difference now is that critics are seeing her in action.

Saldana has even weathered criticism from Simone's daughter, Lisa Simone Kelly, who has said Saldana wasn't the best choice "appearance-wise" and that "Nina" was an unauthorized biopic.

For many critics, it's not just that a light brown actress is portraying a darker brown singer, it's what that dynamic means.

"To me, we are the most beautiful creatures in the world — black people. And I mean that in every sense," Simone said during an interview.

So much of Simone's work was about the black American experience and what it was like to be a dark-skinned black woman.

Slate's Damon Young commented that Saldana's casting as Simone is what happens when diversity is "thought of in aesthetic and largely superficial terms" and not truly fulfilled.

Writer Eve Ewing tweeted that this was a missed opportunity and darkening Saldana's skin "reinforces the idea that there can only be a few black actors taking central stage at a time."

Saldana's been relatively quiet through the criticism, but she tweeted Tuesday, "'I'll tell you what freedom is to me - No Fear ... I mean really, no fear.' #NinaSimone"

Nina is expected to be released April 22.