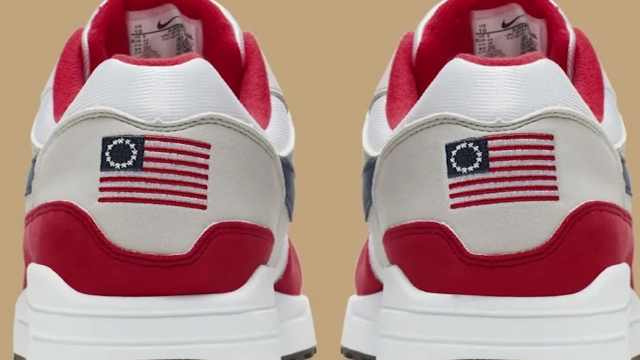 SMS
Nike Pulls 'Betsy Ross Flag' Sneakers After Backlash
By Briana Koeneman
By Briana Koeneman
July 2, 2019
Nike posted images of the sneaker online, and critics were quick to say that many consider the flag an offensive symbol connected to slavery.
SHOW TRANSCRIPT

Nike has decided not to release a special July Fourth-themed sneaker after the company got some major backlash over a design on the heel of the shoe.

The shoe features the so-called "Betsy Ross flag" — a version of the American flag created during the American Revolution that has 13 white stars in a circle to represent the 13 colonies.

Nike posted images of the sneaker online, and critics were quick to say that many consider the flag an offensive symbol connected with an era of slavery.

And others pointed out, in recent years, the flag has been adopted by some extremist groups as a symbol of white nationalism.

According to The Wall Street Journal, former NFL quarterback and activist Colin Kaepernick even told Nike it shouldn't sell the shoe. Sources told the outlet the company contacted retailers soon after and asked them to return the sneakers without an explanation.

A spokesperson for Nike said in a statement the company decided to pull the shoes because they "featured an old version of the American flag."

But some conservatives, including Arizona Gov. Doug Ducey, criticized Nike's decision as disappointing and "a shameful retreat."

The sneaker is nowhere to be found on Nike's website or apps. But as of Tuesday morning, resale sites like StockX were selling the shoes for close to $2,500.