Is A Sub-2-Hour Marathon Possible? Nike And Adidas Think So 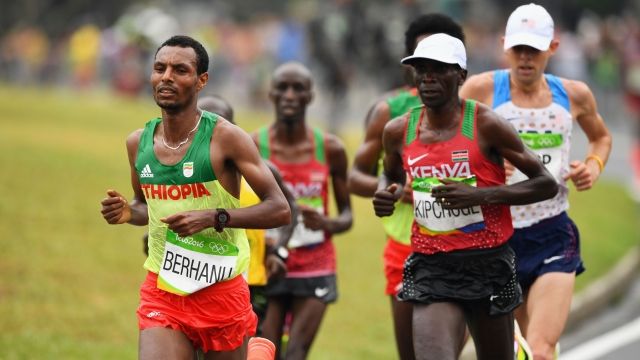 SMS
Is A Sub-2-Hour Marathon Possible? Nike And Adidas Think So
By Carter Woodiel
By Carter Woodiel
December 18, 2016
Three separate projects aim for success, but there's plenty in the way of a dream race happening anytime soon.
SHOW TRANSCRIPT

A sub-two-hour marathon: It's billed as the Holy Grail of distance running. And now, big apparel companies are announcing campaigns to have a runner break the mark. The question is, is it really feasible right now?

Nike recently announced a bid called Breaking2 in hopes of getting a runner to crack the two-hour mark for the first time. The Wall Street Journal reports Adidas is working on a similar project. There's also Sub2, a smaller project that's been publicly in the works since 2014.

Nike and Adidas also have some high-profile runners on their side. The last four world records have all been set by Adidas runners, and Nike has Eliud Kipchoge, the reigning gold medalist from the Rio Olympics this summer.

But while the dream of a two-hour marathon certainly is captivating, there's a lot standing in the way. There's still a roughly three-minute gap between the world record and the two-hour mark. Some say that gap won't close for decades.

There are ways to get around this, but those come with their own problems.

Nike says it's going to try to shave seconds off runners' times by putting them on a favorable course — one that's cool, downhill and free of sharp turns. But that means the two-hour time wouldn't count in the record books.

And if you're a fan of running, you've probably guessed another concern: doping. It certainly seems like a convenient way to make two hours a little easier to catch.

Sub2, the smaller group, emphasizes running a clean race as a vital part of its plan. But it's unclear what anti-doping protocol Nike or Adidas will put in place to make sure their runs are clean.

There is one thing Nike and Adidas would have on their side: funding. Big paychecks mean something to world-class runners. Nike and Adidas have big enough pockets to lure athletes away from the competitive circuit for a while. Sub2 is a different story — it's still looking for donations to meet its $30 million budget.

Still, running a two-hour marathon is at least theoretically possible. One study says humans are capable of running a marathon in as little as 1 hour, 58 minutes — if absolutely everything goes right.