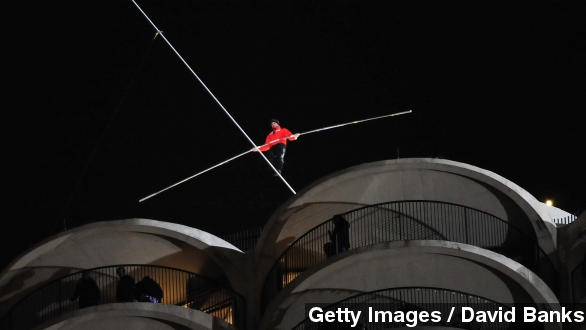 Professional daredevil Nik Wallenda has already developed a reputation for wire-walking across some of America's most famous dangerous drops.

And on Sunday, the daredevil successfully completed another incredible stunt: traversing three Chicago skyscrapers at heights over 500 feet, uphill and blindfolded.

The seventh generation of a family of acrobats, Wallenda has already sealed his place in history by crossing Niagara Falls in 2012, and the Grand Canyon in 2013.

And while he's faced steeper drops and sharper winds, the Chicago walk broke Guinness World Records for highest inclined walk and highest blindfolded walk. The day before the stunt, Wallenda told reporters he was looking forward to the risk. (Video via WMAQ)

WALLENDA VIA CHICAGO SUN-TIMES: "I look up at those buildings, and contrary to what you guys would think, that it would freak me out, stress me out, I get excited."

His death-defying stunts have drawn a lot of attention in the past — Discovery attracted 13 million television viewers and 2 million stream viewers when they aired Wallenda's death-defying walk across the Grand Canyon last year.

The programs have raised some ethical questions, however. The New York Times notes "The high-wire act illustrates the extreme risks some television networks are taking to attract lucrative, live audiences. ... Some media observers questioned whether a version of the 'Hunger Games' ... would be in the future."

But Discovery insists they've taken all proper precautions to ensure the walk was as safe as possible. The network also time-delayed their broadcast by ten seconds to ensure "nothing that is insensitive or inappropriate" is aired.

Wallenda himself is up-front about the risks. He told The Daily Beast, "There’ll be more hits on Facebook for an accident then there'll ever be for making it safely, because that's what people want to see. ... I realize [an accident is] a reality, but so is dying on a plane, or driving in a car, or being on a train that derails."

The walk was broadcast at 7 pm EST by Discovery. Wallenda started walking at about 8:30 and spent a combined time of about 8 minutes and 30 seconds on the wires.