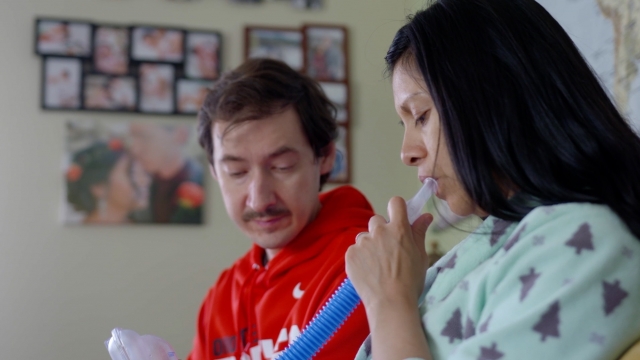 SMS
Many Questions Remain About Pregnancy And COVID-19
By Lindsey Theis
By Lindsey Theis
May 22, 2020
Researchers are trying to determine what, if any, effects having the coronavirus. might have on women and their unborn babies.
SHOW TRANSCRIPT

Veronica Markley is on the mend after fighting for her and her unborn baby’s life. She left a Colorado hospital on April 21st after being in the intensive care unit and on a ventilator.

"It was just really hard being alone," she told Newsy. "There was, like, a night that a day and a night. I just was in despair. Just couldn't believe it had happened to me. Depression and loneliness and sadness."

Now, at 23 weeks pregnant, she still is taking it very slow. She is much stronger, but she’s not even close to her pre-COVID state. Physical therapy, breathing therapies – each day is a little win, both she and her doctor say.

"When she first left the hospital, we sent her home with an oxygen saturation monitor and we had video calls with her on a daily basis for a couple of weeks to make sure that she was really continuing to to move in the right direction," Dr. Bronwen Kahn, a Maternal Fetal Medicine Specialist at Obstetrix Medical Group of Colorado and Markley's doctor said.

Doctors learn a little more each day about COVID-19, but right now, experts say there are so many unanswered questions pertaining to pregnant women and their babies.

"The women that we've seen critically ill have been in their early third trimester. But that's just a very small sample size, as you know. I don't want people to be falsely reassured by lack of data. I think that there's there's real danger in taking too much comfort from not knowing enough," Kahn said.

"The first thing, obviously, is maternal deaths. The women who deliver in hospital, whether they do deliver prematurely, whether they deliver by cesarean section, and what was the indication for the cesarean section? What are the psychosocial consequences for women who either deliver alone or had planned a certain type of birth with the support of a dula or a midwife and then don't have that experience? Will there be long-lasting consequences?" National Institute Of Child Health And Human Development Director Dr. Diana Bianchi said.

Bianchi tells Newsy the institute is working on getting adequate numbers in the U.S., starting a study of 1,500 pregnant women with COVID-19 and their babies after they are born, to see what consequences infection has on birth defects and a baby’s growth pattern.

The NIH has also started to collect and analyze medical records from some 21 thousand pregnant patients across more than a dozen US hospitals, hoping to find answers to those questions.

It’s not just for the pregnant women and their unborn children. One small recent study showed 87% of mothers admitted to the ER showed no COVID-19 symptoms, despite testing positive for the virus. The data, Bianchi says, is crucial for officials to make safety decisions.

"Very practical questions right now are circling around, like whether all pregnant women presenting for admission should be tested so that everybody knows what they're dealing with. But so far, the American College of Obstetrics and Gynecology has only encouraged it. They haven't absolutely made it a rule regulation that every pregnant woman has to be tested at the time of delivery. But I think hopefully, ultimately, we'll get to the point where everyone is tested," Bianchi said.

As for Veronica Markley, she’s counting down the days until July when baby No. 2 is due, and working on healing. As she waits for answers, she has a hopeful but pragmatic message for others in her shoes.

"It's gonna be a slow recovery process," she said.