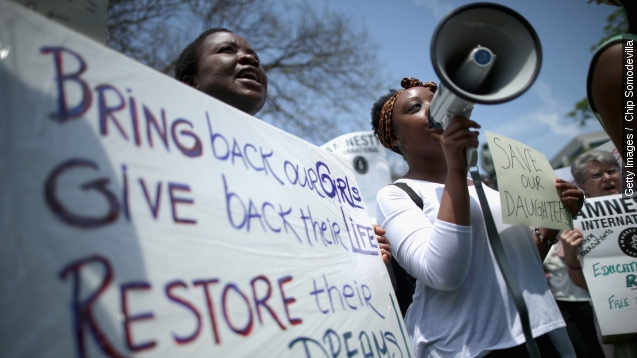 Nigeria’s government is celebrating the rescue of at least a dozen women and children who had been kidnapped by the militant group Boko Haram, but there are hundreds more who are still held captive by the group. (Video via Christian Broadcasting Network)

Nigeria's President Muhammadu Buhari, who campaigned on a promise to be tough on terrorist groups, said the government is negotiating with Boko Haram to secure the release of more kidnapping victims, but the price is steep — the group wants one of its bomb-making experts released in return. A demand Buhari says he won't meet.

The group has kidnapped women and children by the hundreds, infamously attacking a school in Chibok and kidnapping more than 200 schoolgirls in April of last year. Many were last seen more than a year ago in a video released by the group. (Video via CBS)

Boko Haram's leader, Abubakar Shekau, has since said they have all converted to Islam and have been "married off” — although that hasn't been confirmed. Some of them have been rescued, but most are still missing. (Video via Sahara TV)

Although Buhari says he will not meet Boko Haram’s current demands, he has formally opened negotiations with the group. He expressed his concerns in Paris Tuesday:

"We have to first identify those to claim to be leaders of Boko Haram. … We have to be careful about it" (Video via France 24)

The Centre for Crisis Communication, an NGO that provides crisis support, agrees with Buhari and says the government’s new position is necessary as military force alone has failed to rescue the girls.

Boko Haram has weakened since government troops from Chad and Nigeria pushed the group out from around 25 towns where the militants had declared a caliphate. The group occasionally comes back for some hit-and-run attacks and suicide bombings. In neighboring Cameroon alone, around 400 people have been killed by the Islamist militants. (Videos via CCTV Africa and France 24)

In its six-year uprising, the group has caused around 20,000 deaths. August 27 marked 500 days since the Chibok schoolgirls went missing.