No Evidence For Nielsen's Claim About Illegal Immigration Billboards 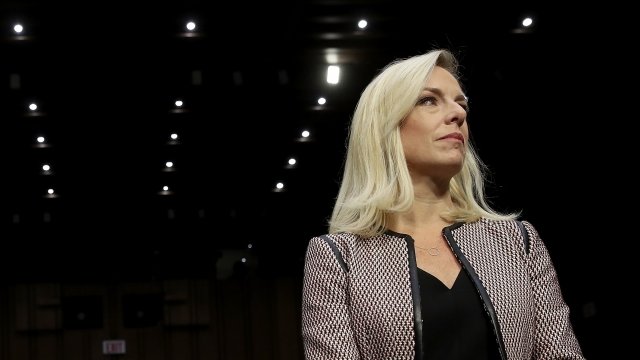 SMS
No Evidence For Nielsen's Claim About Illegal Immigration Billboards
By James Packard
By James Packard
August 1, 2018
Secretary of Homeland Security Kirstjen Nielsen made an eyebrow-raising claim at the Aspen Security Forum. Upon fact-checking, it doesn't hold up.
SHOW TRANSCRIPT

While she was up at the Aspen Security Forum, Secretary of Homeland Security Kirstjen Nielsen made a claim about immigration advertisements in Central America, and it needs some setting straight.

"There are billboards in Central America in the Northern Triangle countries advertising how to grab a kid to get into the United States illegally. Because that loophole is so big — billboards," she said.

There is no evidence to support that.

Politifact reached out to Nielsen's team multiple times looking for any evidence to back up what she said. They didn't respond.

And immigration experts who've done a lot of research and travel in the area say they've never seen any such billboards.

Those same experts say people in Central America tend to get their information on how to get into the U.S. through the grapevine — largely social media.

Plus, the governments of countries like Guatemala and Honduras encourage their citizens to stay in the country and not emigrate to the U.S. A billboard advertising how to grab a child and use that child to get into the U.S. illegally would likely be taken down pretty fast.