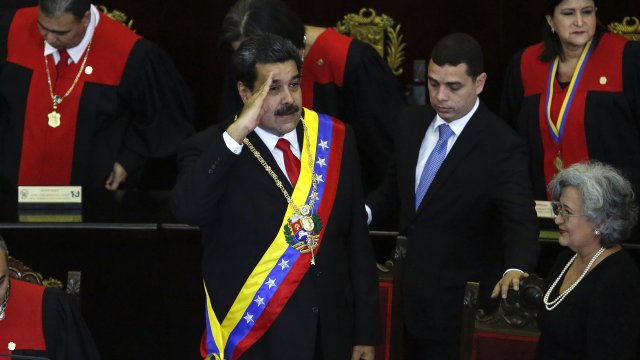 SMS
Nicolás Maduro Orders Venezuelan Diplomats To Leave US
By Ahmed Jawadi
By Ahmed Jawadi
January 24, 2019
​His orders come a day after he announced he is breaking ties with the U.S.
SHOW TRANSCRIPT

His orders come a day after he announced he's breaking ties with the U.S. and demanded that all American diplomats leave Venezuela within 72 hours. U.S. Secretary of State Mike Pompeo responded by saying the U.S. does not recognize Maduro's "legal authority to break diplomatic relations" and, as such, will not pull its diplomats out of Venezuela.

The recent turmoil in Venezuela comes after President Donald Trump officially recognized Venezuelan National Assembly President Juan Guaidó as the country's interim president. Guaidó swore himself in as president Wednesday, as tens of thousands of Venezuelans took to the streets to protest Maduro's re-election.

The U.S. and several other countries say Maduro's win was fraudulent and that he's a dictator who has led Venezuela into an economic crisis. Guaidó and his supporters say Venezuela's constitution allows a presidential vacancy to be filled by the president of the National Assembly.

Several foreign governments are supporting Maduro's overthrow, but not everyone is on board. Russia warned the U.S. and other countries not to launch a military intervention in Venezuela. A Chinese foreign ministry spokesperson echoed those sentiments, saying China "opposes external intervention in Venezuela" and hopes "the international community will jointly create favorable conditions for this.”

The U.S. Mission to the U.N. has called for an open meeting of the U.N. Security Council to further discuss the crisis in Venezuela. That meeting is set for Saturday.