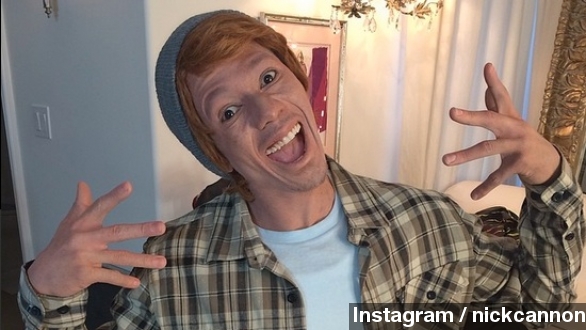 Artists will go through a lot to promote their albums, from dropping free mixtapes to appearing all over late night television.

But Nick Cannon chose to take a different route to promote his new album. Yep let that image sink in. He even introduced the new alter-ego on Instagram.

Now, as you might imagine, Cannon has received a lot of criticism for the whiteface — not surprising when you recall the countless times people dressed in blackface have stirred up trouble.

"You would think celebrities would no better but they have moments where they weren't thinking." (Via ABC)

But some would argue the criticism doesn't land as sharply on black celebrities.

"Let's just get this out the way, If a black entertainer depicts a white person in whiteface, that's okay, that's funny." (Via WPIX)

Prime example, the movie "White Chicks" where Marlon and Shawn Wayans dress up as white girls for the majority of the film. (Via Columbia Pictures / "White Chicks")

So what's the difference? Well some argue history.

There is no historical event attached to "whiteface." Blackface, on the other hand, certainly does have a painful past to go along with the practice. (Via blackface.com / Kit Parker Films)

And in his own defense, Nick Cannon points to intent.

"Man I'm racist and so are you, we all racist. prejudice is prejudging we all do it. ... As long as there's no hatred in it, let's not avoid the truth. We're different." (Via Revolt)

He posted this picture to Instagram hours after debuting his costume with the caption, "There is a big difference between Humor and Hatred."