Nick Ayers Won't Be Trump's Next Chief Of Staff 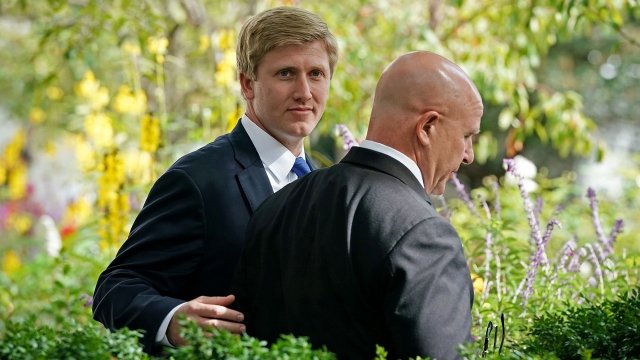 SMS
Nick Ayers Won't Be Trump's Next Chief Of Staff

By Katherine Biek
December 10, 2018
Ayers, who currently serves as the vice president's chief of staff, tweeted Sunday that he'll be leaving the administration at the end of the year.
SHOW TRANSCRIPT

Nick Ayers is not going to be the next White House chief of staff.

Ayers, who currently serves as chief of staff to Vice President Mike Pence, tweeted Sunday that he'll be leaving the administration at the end of the year.

Prior to that announcement, multiple outlets were reporting that Ayers was a likely pick to replace President Trump's outgoing chief of staff, John Kelly.

The president had reportedly even spoken to Ayers about the gig, but a White House official told CNN that the two couldn't agree on how long Ayers would serve.

President Trump reportedly wants a chief of staff who'll serve out the remainder of his term, but Ayers, who has kids and wants to move back home to Georgia, said he could only hold the position temporarily.

Hours after Ayers announced his upcoming departure, President Trump tweeted that he was interviewing candidates for the chief of staff role and he'd soon be making a decision.