NHTSA Now Wants Students To Buckle Up On School Buses 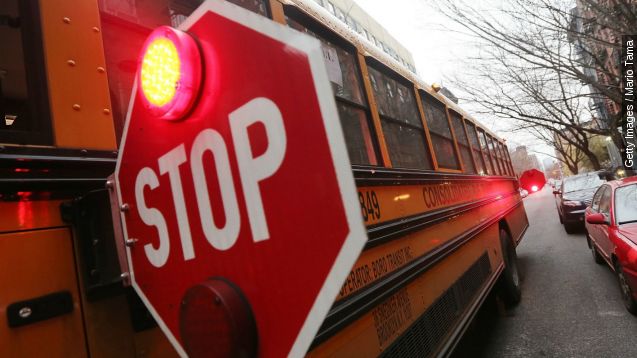 NHTSA changed its view on students buckling up on school buses. But that doesn't mean buses will have seat belts anytime soon.

The National Highway Traffic Safety Administration is shifting its stance on seat belts, saying school buses would be safer if their passengers had to buckle up.

But the "protective envelope" of close seats and cushioned backs clearly isn't effective in every accident. (Video via NBC)

This change in stance doesn't mean schools will have to adjust their buses accordingly — yet. Right now, only six states require seat belts.

Rosekind was clear that he was not announcing a new rule — rather, the administration will launch projects to try to improve data on seat belt safety. He said, "Our goal is a three-point belt for every child on every bus."

Requiring every school bus to have seat belts isn't cheap. NHTSA estimates installation would cost between $7,300 and $10,300 per bus.

There are almost a half a million school buses in the U.S. They transport approximately 26 million students a day, according to the American School Bus Council.