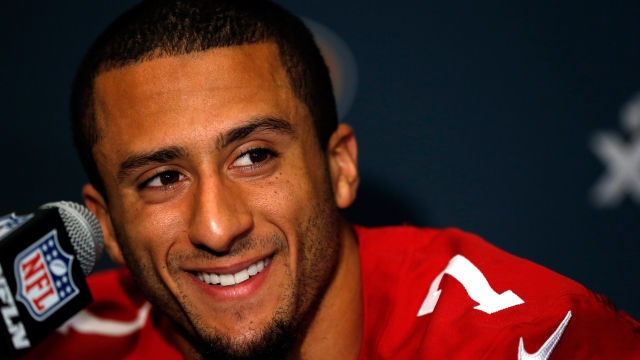 SMS
NFL To Hold Workout Session For Colin Kaepernick
By Meg Hilling
By Meg Hilling
November 13, 2019
The NFL says the workout session is an opportunity for teams to evaluate Kaepernick's "level of interest in resuming his NFL career."
SHOW TRANSCRIPT

According to ESPN, a memo sent by the NFL to every team in the league says the workout is an opportunity for coaches and general managers "to evaluate his current readiness and level of interest in resuming his NFL career."

On Twitter Tuesday, Kaepernick said, "I've been in shape and ready for this for 3 years, can't wait to see the head coaches and GMs on Saturday."

Kaepernick hasn't played for the league since the 2016 season. At the time, he had begun to kneel during the national anthem in protest of police brutality and racism against African-Americans. Kaepernick caught backlash not only from some fans and politicians, but some of the league's owners and President Trump as well.

Earlier this year, Kaepernick settled a collusion grievance he filed against the league in 2017. He argued the league colluded to keep him from playing after his refusal to stand for the national anthem.

According to ESPN, Kaepernick’s representatives have expressed some concern about the workout being held on Saturday, as many teams will be preparing for games the next day.

The workout is reportedly closed to the media and will take place at an undisclosed location in Atlanta.