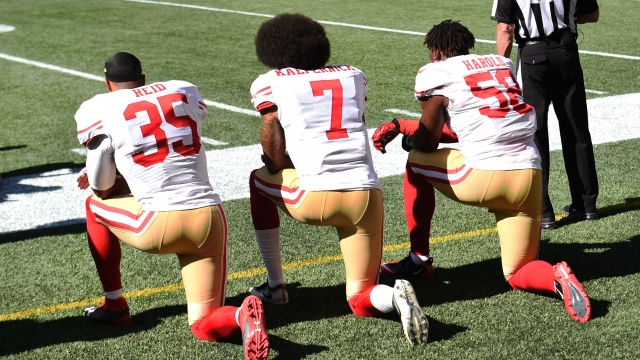 SMS
Kaepernick And Reid Accept NFL Settlement In Collusion Lawsuit
By LeeAnne Lowry
By LeeAnne Lowry
February 16, 2019
The NFL has settled with Coliin Kaepernick and Eric Reid over a lawsuit that claims the NFL put the players on a blacklist.
SHOW TRANSCRIPT

The NFL has settled with Colin Kaepernick and Eric Reid over a collusion lawsuit they filed in 2017, according to a statement released on Friday. The lawsuit accused NFL teams of colluding to keep Kaepernick and Reid from playing because they chose to kneel during the national anthem to protest racial injustice.

The settlement amount is undisclosed, but given that a starting quarterback makes around $20 million a year, it probably wasn't peanuts. There also hasn't been any admission of whether or not the NFL colluded to blacklist the players.

The NFL and lawyers for Kaepernick and Reid released similar statements saying the settlement included a confidentiality agreement, so we will not be hearing further from the NFL or either player regarding the lawsuit.

The NFL doesn't typically settle, which some see as a sign that the league had colluded and that it couldn't disprove this in court. ESPN notes that it could also mean the NFL didn't want to go to a hearing that would expose "inner workings of league business."

The NFL has seen boycotts and ratings suffer since the controversy. Just in the past few months, the league was still receiving backlash as multiple artists, including Rihanna, turned down offers to perform at the Super Bowl in solidarity with Kaepernick.