NFL Refs Blow Another Big Call, But Not Much Will Change 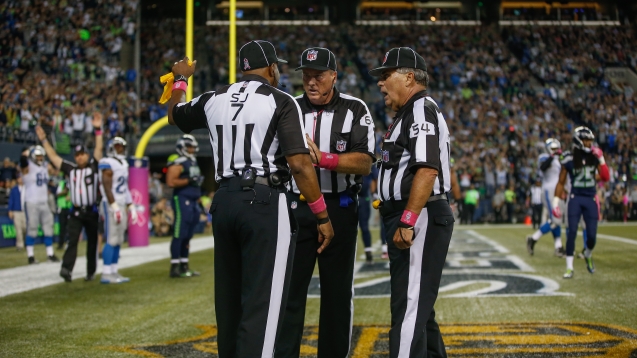 SMS
NFL Refs Blow Another Big Call, But Not Much Will Change
By Grant Suneson
By Grant Suneson
October 6, 2015
An NFL official missed another crucial call late in a game, but it seems unlikely that anything is going to change with how the league handles replay.
SHOW TRANSCRIPT

The refs blew it again! No, that’s not an angry fan screaming at the TV; that’s basically what the NFL said after Monday Night Football. But they’re still not going to let the refs fix it.

Late in the game, Calvin Johnson fumbled at the goal line and Seahawks LB K.J. Wright knocked the ball out of bounds on purpose. He thought that would give the Seahawks the ball on the twenty yard line and seal their win.

It did, but it wasn’t supposed to. Turns out you can’t intentionally bat the ball out of bounds when you’re in the end zone. Instead of being called a penalty that would’ve given the Lions the ball at the goal line, the blown call drastically cut their chances of winning the game.

One ESPN analyst said, “A first and goal inside the 1 for the Lions. That’s about an 81% chance of winning. With the non-call, Seattle’s got the ball that’s a touch back, it’s just a 10% win probability for Detroit.”

The NFL’s VP of officiating admitted the call was wrong, but the play wasn’t reviewable. So why won’t the league let their refs make sure they get the call right?

It turns out, it’s not what you do, but whether you do it on purpose.

“You can’t rule on an illegal bat in replay because, again, it is a judgment call. It’s an intentional act and you can’t rule on intent. So that’s something that has to be called on the field,” NFL VP Dean Blandino said.

Of course there are plenty of other calls that the NFL won’t let their officials take a second look at.

There are some calls like offsides where the rules are pretty cut and dry. But for other penalties like pass interference, the rulebook tells officials to throw a flag if the defender "significantly hinders" the receiver's progress. And it's up to the refs to determine what exactly significant means.

Lions fans will remember last year’s playoff game against the Cowboys. The refs seemed to miss a blatant pass interference call late, but subjective penalties like that are unreviewable.

And even if calls like those were subject to review, it would flat out take way too long.

Considering The Wall Street Journal reported the average NFL game only has 11 minutes of anyone actually playing, more breaks in play are just about the last thing any football fan wants.