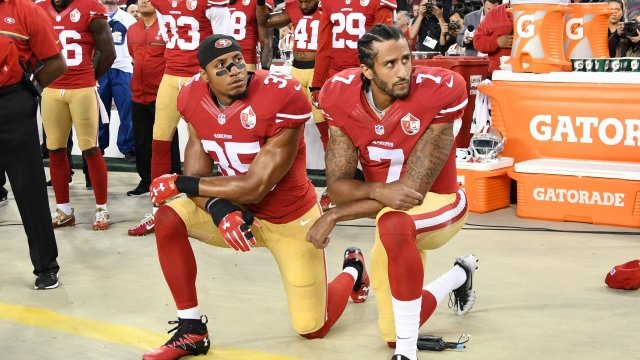 SMS
NFL: Kaepernick's Social Justice Causes Deserve 'Attention And Action'
By Gabrielle Ware
By Gabrielle Ware
September 4, 2018
This follows an ad teaser Colin Kaepernick posted that said: "Believe in something. Even if it means sacrificing everything."
SHOW TRANSCRIPT

The NFL seems to be saying it supports the social justice issues Colin Kaepernick stands for, following a picture he posted on Twitter.

On Monday, Kaepernick posted a picture from his new Nike ad with a caption that read: "Believe in something. Even if it means sacrificing everything."

The former San Francisco 49er hasn't been signed by a team and is now a free agent. He filed a legal grievance against the NFL saying it colluded to keep him off every roster because of his protests during the national anthem.

The league said in a statement Tuesday, "The social justice issues that Colin and other professional athletes have raised deserve our attention and action." Those issues include racism and police brutality.

Still, the league has yet to come to a policy agreement with players about kneeling during the anthem, a demonstration that Kaepernick began.