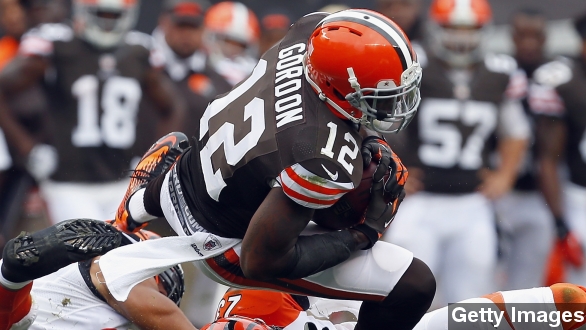 Although medical marijuana is now legal in states like Colorado and Washington, it's still illegal in the NFL, and Cleveland Browns wide receiver Josh Gordon is paying the price.

The NFL upheld its yearlong suspension of Gordon in a ruling announced Wednesday. That means last year's top NFL receiver will sit out not only the whole 2014 season, but also next year's training camp. He will need to apply for reinstatement into the league as well.

Gordon released a short statement through the NFL Players Association that read, in part: "I'd like to apologize to my teammates, coaches, the Cleveland Browns organization and our fans. I am very disappointed that the NFL and its hearing officer didn't exercise better discretion and judgment in my case."

But some have pointed out a yearlong suspension for Gordon for using marijuana is unfair considering Ravens RB Ray Rice got just a two-game suspension for allegedly physically assaulting his wife.

Talk of that suspension being too lenient started immediately after it was announced, but it was rekindled Wednesday after news broke of Gordon's yearlong ban. Still, CBS' Doug Gottlieb says Gordon got what he deserved in comparison to Rice. (Video via MSNBC)

When that suspension was handed down in the middle of Gordon's appeal in July, CBS' Gregg Doyel wrote, "Is Goodell really going to suspend Josh Gordon for a whole season because of something so imprecise, and small, as those test results -- when something as clear, and enormous, as the Ray Rice elevator incident yielded just two games?"

But ESPN's Colin Cowherd believes the comparisons of the two aren't fair.

Gordon was suspended two games last year after failing a drug test, was arrested on a DWI charge earlier this year and reportedly failed multiple drug tests while in college at Baylor.