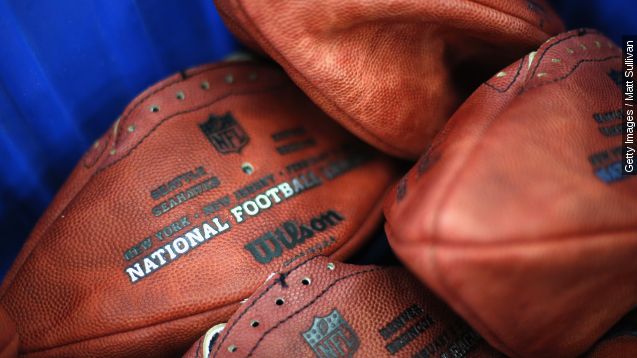 SMS
NFL Gets Tougher On Monitoring Football Air Pressure
By Matt Moreno
By Matt Moreno
July 27, 2015
The league is introducing a new set of rules that will require more oversight from officials and keeping records of footballs' PSI.
SHOW TRANSCRIPT

While we still await the NFL's ruling on deflategate, the league is moving forward with a few other things related to the scandal.

Footballs will be under stricter scrutiny next season according to Fox Sports. The changes include random air pressure checks during halftime, numbering the balls to keep better records, inflation or deflation of balls found outside the 12.5 to 13.5 PSI range, and custody of the balls given to the league-hired kicking ball coordinator prior to the game.

Reactions to the the beefed up rulings aren't great. Former NFL VP of officiating and Fox Sports analyst Mike Pereira calls it an overreaction since officials have so little time in between halves and ESPN's Mike Greenberg says it could actually cause more issues.

"They have so little time as it is, maybe a window of five minutes. so now, instead of catching their breath and preparing for the second half, they'll be measuring footballs," Pereira said.

"I suppose you can say that's a good thing considering what we just had here. But from a legal standpoint, it also opens them up to the possibility a judge would decide 'Listen, if you consider this such an incredible threat to the integrity of your game, you would have done something about it before,'" Greenberg said.

This all comes after the AFC Championship game last season when the Indianapolis Colts complained about the under inflation of the New England Patriots' footballs. (Video via WJLA)

An investigation into how the footballs became under-inflated determined Patriots employees were likely to blame for deflating them — that's probably why the league is taking more control over supervision of the footballs.

According to The Boston Globe, two Patriots locker room employees remain indefinitely suspended by the league.