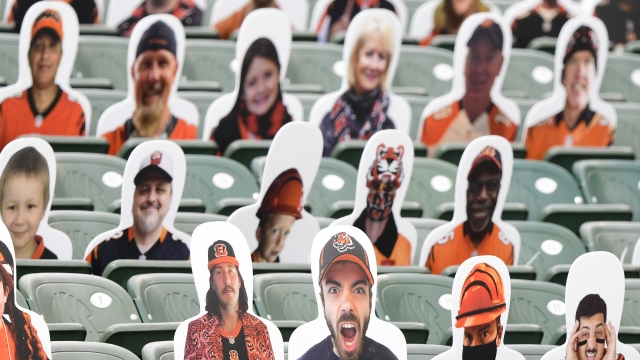 SMS
NFL Fans Weigh COVID-19 Risks
By Lindsey Theis
By Lindsey Theis
September 14, 2020
As some teams allow fans to attend in person, medical experts warn that the airborne coronavirus can be spread through shouting, cheering and singing.
SHOW TRANSCRIPT

But like many die-hard fans, this year, is different for them. With NFL games, come COVID-19 risks.

The Broncos are one of the teams with no fans for their home opener. Some teams, like the Giants and Jets, don’t expect to host fans at all this season.

Others, like the Kansas City Chiefs hosted tens of thousands of fans right away.

But the problem with that, Northwestern Medicine’s Dr. Irfan Hafiz says it's ideal for spreading the coronavirus.

"When shouting or speaking very loudly or especially singing, there's definitely a lot of case reports. There is more aerosolization during those moments. So definitely the risk is a lot higher there," Hafiz, an infectious disease physician and the Northwest Region chief medical officer for Northwestern Medicine, told Newsy.

Doctors say fans cheering, getting up for a concession, or tailgating close to others is also risky.

Fans should be looking at their community spread or case positivity rate — that’s the percentage of all COVID-19 tests performed that are actually positive. Anything higher than 3 to 5 percent should be a reason to stay at home and not travel, near or far, to a game.

"If your area's experiencing a higher number, you definitely don't want to be taking that risk of asymptomatic spread into a lower-risk area. That certainly can introduce that issue into the area that you're traveling to," Hafiz said.

In Denver, the Bronco Brothers aren’t completely out of luck. Officials will adjust for a September 27th home game. Colorado Gov. Jared Polis and team officials say some 5,700 paying fans can attend in "pods" of 175 people, sitting in isolated sections of Empower Field at Mile High stadium.

“So, when you look at where people enter, the restrooms they use, the concessions they use, it's like a number of different groups of 175 that are there. That would allow for the groups that do have a outbreak, the contact tracing and the notification of others in that group,” Polis said.

"That's a very small percentage of fans that are gonna be allowed in," Jussel said.

There’s no tailgating until week three.

"The level of excitement has just changed. And you've got to channel that energy in just a different way," Grimmett said.

This season is strange for the Bronco Brothers. They’ll replace sitting in the stands with sitting in their living rooms for the next few weeks. But their spirit for their team...has never been greater.

"We all come together for a few hours and we get to root for the home team and unite in orange," Jussel said.

"It's difficult because things are just uncertain and we're more divided than we've ever been. But we do love the Broncos and we want to encourage everybody to support each other, even though these games don't look like they used to," Grimmett said.