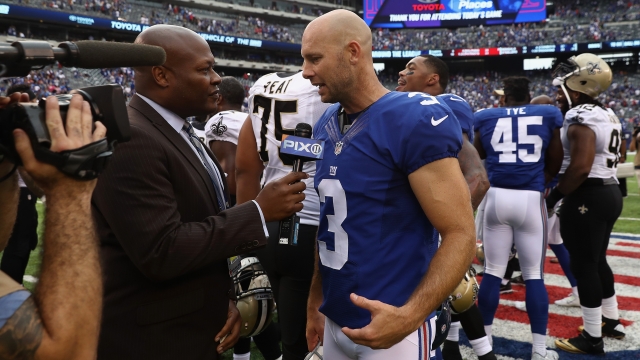 SMS
The NFL's New Domestic Violence Policy Didn't Stop Its Latest Scandal
By Carter Woodiel
By Carter Woodiel
October 23, 2016
Kicker Josh Brown has admitted to abusing his wife, but the way the league has handled the situation doesn't quite add up.
SHOW TRANSCRIPT

The NFL is facing another domestic violence scandal, despite a new policy that was supposed to straighten things out.

New York Giants kicker Josh Brown was arrested on a charge of domestic abuse in May 2015. The NFL looked into the case for 10 months but said they couldn't find much and suspended Brown for one game.

Now, a sheriff's office in Washington has released documents that include journal entries from Brown himself admitting to abusing his then-wife.

There are a couple things that don't add up here. For one, the light suspension goes against the NFL's policy regarding domestic violence. Commissioner Roger Goodell updated that policy after the Ray Rice domestic violence scandal in 2014.

"But now I will get it right and do whatever is necessary to accomplish that," Goodell said at a press conference.

SEE MORE: What Should We Do About Athletes Accused Of Domestic Violence?

The policy called for a six-game suspension for a player's first offense, far more than what Brown got — though the policy does allow for mitigating circumstances.

Another issue here is that the NFL didn't know about Brown's confession until after it was released. The league says it did all it could to find information, but authorities disagree.

King County Sheriff John Urquhart says when an NFL official wrote the office a request for information on the case, he never said he worked for the league.

"We don't have them calling us here," Urquhart told KIRO-FM in Seattle. "We've got some goofus from Woodinville named Rob Agnew asking for the case file. We have no idea who he is."

The NFL said it's "unfortunate" they didn't know sooner about Brown's confession and says it's looking into the matter. Brown now sits on paid leave, and ESPN reports he won't play for the Giants again.