NFL Commissioner Puts Pressure On Players To Stand During Anthem 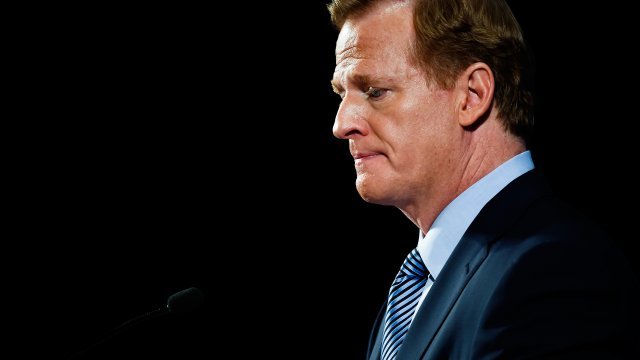 SMS
NFL Commissioner Puts Pressure On Players To Stand During Anthem
By Gabrielle Ware
By Gabrielle Ware
October 10, 2017
He sent a letter to all 32 teams on Tuesday that said he wants them to stand.
SHOW TRANSCRIPT

NFL Commissioner Roger Goodell says he wants all players to stand during the national anthem.

In a memo he sent to all 32 teams Tuesday, he said: "Like many of our fans, we believe that everyone should stand for the National Anthem. ... We want to honor our flag and our country, and our fans expect that of us."

The players kneeling during the pregame national anthem and their supporters have repeatedly said they're protesting racial inequality and police brutality, not the flag.

Related StorySports And Politics Are More Intertwined Than You Might Think

As of now, it doesn't seem like Goodell can make the players stand. NFL guidelines require players to take the field during the anthem but don't explicitly require them to stand during it.

Some players have reported feeling pressure to stand recently, according to a report by The Root. Cowboys owner Jerry Jones said anyone who "disrespects the flag" during the anthem won't be allowed to play.

In late September, nearly every team in the NFL protested in some form after President Donald Trump called players who kneel during the anthem an expletive and suggested they should be fired.

But times may be changing. Goodell says the league has developed a plan to "move past" the controversy and it will be discussed next week.

And Deadspin notes, an updated version of the NFL's anthem guidelines has been distributed to media outlets with more specific punishments for players who don't take the field during the anthem.

In 2014, it said it "may result in disciplinary action from the League office." Now it says it may "result in discipline, such as fines, suspensions, and/or the forfeiture of draft choice(s) for violation of the above, including first offenses."

The White House wants the NFL to do more on this front.

White House press secretary Sarah Huckabee Sanders said: "I think we would certainly support the NFL coming out and asking players to stand just as the president has done. ... We're glad to see the NFL taking positive steps in that direction."

And Trump tweeted Tuesday: "Why is the NFL getting massive tax breaks while at the same time disrespecting our Anthem, Flag and Country? Change tax law!"

Goodell also vaguely hinted at another way players could speak their minds, saying the NFL's plan "would include such elements as an in-season platform to promote the work of our players on these core issues."