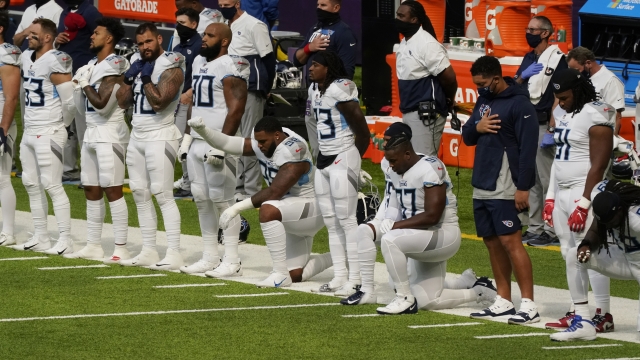 SMS
Concerns For NFL Season Amid Coronavirus Outbreak
By Gage Jackson
By Gage Jackson
October 7, 2020
Players on multiple teams have tested positive for COVID-19 in recent weeks as the NFL scrambles to contain the spread of the virus.
SHOW TRANSCRIPT

The NFL is continuing its battle with COVID-19 as more teams are reporting positive tests. Wednesday morning two more Tennessee Titans players tested positive after two consecutive days with zero new infections. To remind you, the Titans were the league's first outbreak of the season with over 20 positive tests since Sept. 24.

This outbreak forced the NFL to push the team's game against the Pittsburgh Steelers this past Sunday to later in the season.

Members of the Las Vegas Raiders have also tested positive. And the New England Patriots have had at least two people test positive – including defensive player of the year Stephon Gilmore and star quarterback Cam Newton.

Newton tested positive first and immediately went into self isolation. However, Gilmore was allowed to travel with the team to Kansas City and play in Monday night's game against the Chiefs, before he returned a positive test. Meaning all the players he interacted with in those days could have also been exposed.

This raises some concern for the Kansas City Chiefs. As Super Bowl MVP Patrick Mahomes is pictured close to Gilmore, chatting after the game.

As of Wednesday morning, no Chiefs players had tested positive after the game – but like Gilmore's case – the incubation period could take several days to show up positive on a test.

In wake of these recent infections, Commissioner Roger Goodell sent a memo to all 32 teams on Monday, threatening harsh penalties and even potential game forfeitures if teams are found violating league protocols.