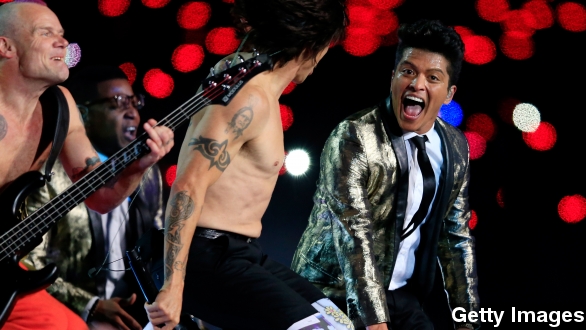 More than 115 million people tuned in to watch Bruno Mars perform at this year's Super Bowl halftime show — the largest audience to view the mid-game spectacle in history. The show is a big boost both for the performers' publicity and pocket book and now the NFL wants them to pay up for using that spotlight.

That's right, the NFL wants artists to "Pay To Play," as The Wall Street Journal puts it. Sources told the Journal the league asked its field of potential halftime show acts "if they would be willing to contribute a portion of their post-Super Bowl tour income to the league ... or if they would make some other type of financial contribution."

The most likely candidates to take the stage at this year's halftime show include: Rihanna, Katy Perry and Coldplay, and, well, sorry, Weird Al fans. No love just yet despite the ever-growing petition.

This would mark the first time the NFL has asked performers to fork over payment to grab the coveted mid-game spotlight, something performers historically have not been paid for — and haven't had to pay the NFL for.

Obviously, artists' reps have not been very receptive to the idea. With the Super Bowl halftime gig comes massive exposure and more money.

Bruno Mars' album sales exploded up the charts within a day following his performance.

His second album, "Unorthodox Jukebox," jumped from number 18 to seven on the Billboard Top 200, a 180 percent boost.

And Bruno's debut album, "Doo-Wops & Hooligans," faired even better, racing from number 82 to 19 on the chart, a 303 percent spike.

And the halftime spotlight has a positive effect on more than just record sales.

A Forbes writer says the social media sphere gets a similar boost. Bruno Mars added 150 Twitter follows in the week after his showing. And Beyonce had well over a million Facebook users posting about her after her gig.

The Super Bowl XLIX halftime show is set for Feb. 1 in Phoenix, Arizona. From what we understand, there will also be a football game played as well.