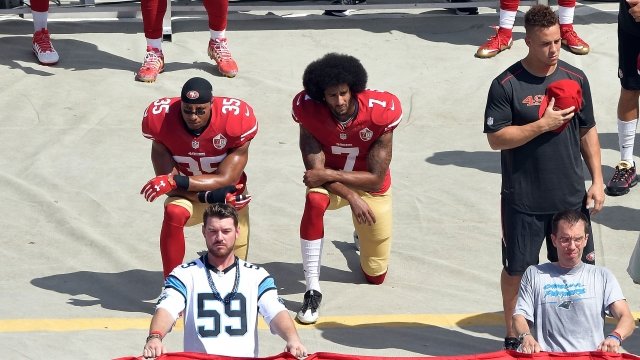 SMS
The NFL Approves A New National Anthem Policy
By Katie Cammarata
By Katie Cammarata
May 23, 2018
Players on the field will have to stand for the anthem, but now they'll also have the option to stay in the locker room instead.
SHOW TRANSCRIPT

Players on the sidelines will have to stand for the anthem, but now they'll also have the option to stay in the locker room if they don't want to stand.

If a player on the field takes a knee during the anthem, his club will face a fine, though it's unclear how much that fine will be. The new policy also says individual teams can "develop [their] own work rules" for players who don't stand.

Commissioner Roger Goodell said in a statement, "We believe today's decision will keep our focus on the game and the extraordinary athletes who play it — and on our fans who enjoy it."

As Newsy has previously reported, the NFL has been the center of some pretty heated debates on the subject after players began kneeling during the national anthem as a form of protest. They've repeatedly said they're protesting racial inequality and police brutality, not the flag.

But people who oppose the protests say kneeling is disrespectful and unpatriotic.

The new policy will go into effect for the upcoming football season.