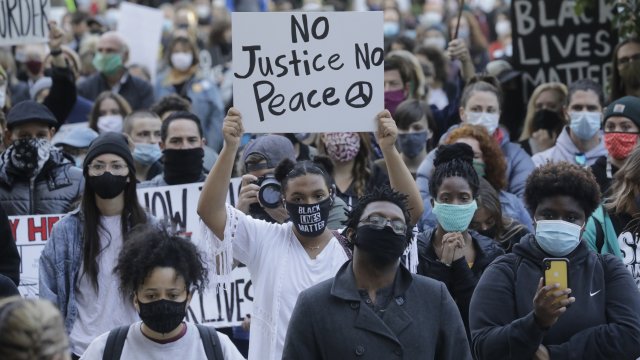 A majority of Americans say they support the Black Lives Matter movement and believe the protests that have gripped the nation in recent weeks have been largely peaceful, according to a Newsy/YouGov survey released Friday.

Sixty-two percent of respondents say they agree with the Black Lives Matter movement, with 44% saying they "strongly agree." Sixty-four percent say they believe the demonstrations have been peaceful "with a few bad actors."

Fifty-two percent of respondents disapprove of military intervention to calm the protests, with a plurality (39%) calling it "highly unjustifiable." Most Americans also disapprove of the use of tear gas to disperse crowds.

There is support for some measures aimed at preventing vandalism or looting. Sixty-nine percent said curfews are justifiable, while 56% said police force could be appropriate in certain situations. Seventy percent said looting was "highly unjustifiable."

And while American attitudes have been largely sympathetic to the Black Lives Matter movement following the deaths of George Floyd, Breonna Taylor, Ahmaud Arbery and others, much smaller numbers have taken action so far.

Just 8% say they have attended or plan to attend a protest or vigil. And most have yet to donate to causes supporting racial equality (12%), contact an elected official (10%) or sign a petition (23%).

Young people have led the nationwide protests. Fifteen percent of those between the ages of 18 and 34 said they have participated, compared to 8% of people ages 35-54, and 3% of those over 55.

But Americans of all ages are talking about racial injustice and policing. Forty-five percent say the recent unrest has spurred conversations with family about racism.

Methodology: This survey has been conducted using an online interview administered to members of the YouGov Plc panel of individuals who have agreed to take part in surveys. Emails are sent to panelists selected at random from the base sample. Total sample size was 1,248 adults. Fieldwork was undertaken between June 9-10, 2020. The survey was carried out online. The figures have been weighted and are representative of all U.S. adults (age 18+).