Newsy Warms Up With The US Women's Soccer Team Before Rio 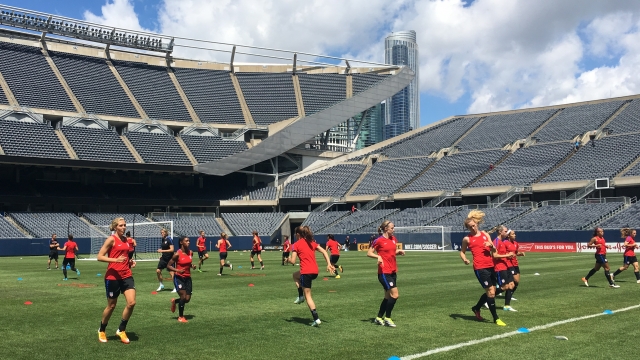 SMS
Newsy Warms Up With The US Women's Soccer Team Before Rio
By Cody LaGrow
By Cody LaGrow
July 8, 2016
The U.S. women's soccer team will play against South Africa for the first time in Chicago ahead of the 2016 Olympics.
SHOW TRANSCRIPT

Newsy hung out at Soldier Field with the U.S. women's soccer team a day before their match against South Africa and a month before the Olympics.

And I'm not usually a sideline reporter, so I had to break the ice the best way I knew how.

"Who do you prefer in your underwear ads — David Beckham or Cristiano Ronaldo?" I asked.

"Ooh, I think I'm gonna have to go with Beckham," Christen Press said.

The women were warming up for their first match ever against South Africa — a sort of friendly face-off before heading to Rio.

"We're thinking about the game tomorrow. Every day, we're reminded of the work we're putting on the field that's going to translate in Rio," Alex Morgan said.

I even tried to talk to Hope Solo. She treated me like I was a mosquito carrying the Zika virus.

And speaking of Zika, I asked, "Are y'all concerned?"

"We always have concern and caution, but with that, we're really excited for a great tournament," Press said.

And I'm excited, too. Good luck, and kick some balls.

This video includes images from Getty Images, H&M and Armani.