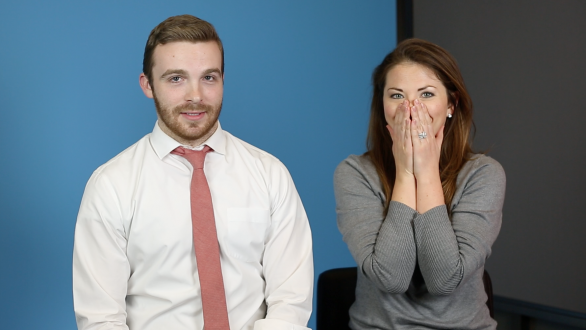 SMS
Newsy Tries Reading Weird N. Korean Slogans Without Laughing
By Matt Picht
By Matt Picht
February 12, 2015
If you thought "The Interview" was a tough watch, buckle up. Our staff reads a few of the 310 political slogans North Korea released Thursday.
SHOW TRANSCRIPT

North Korea's celebrating its 70th anniversary this year, and the country's totalitarian leadership has marked the occasion by releasing 310 propaganda slogans. And they're hilarious.

In North Korea, the slogans are used to reinforce leader Kim Jong-un's cult of personality. In the West, they're mostly fodder for jokes on the Internet.

Here are some examples:

"Let all the service personnel and people form rings and rings of fortress around the respected Comrade Kim Jong Un!"

"Be constantly on the alert without a moment's relaxation!"

"Let the strong wind of fish farming blow across the country!"

"Let us resolutely frustrate the anti-DPRK 'human rights' schemes by the US and its vassal forces!" (Video via KCNA)

And we're not the only ones laughing. According to a 2010 report in The Daily NK, average North Koreans sometimes twist these slogans to reflect the miserable state of the country. (Video via CNN)

So, the 1998 slogan "Comrades Kim Il-sung and Kim Jong-il are a great sun for the people" became "they are indeed the sun; if you go too close you burn to death and freeze if you go too far away."

As they say in North Korea, "Long live the 70th anniversary of the Workers' Party of Korea!"