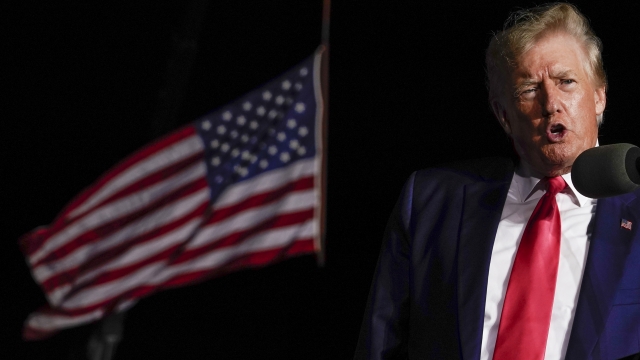 He may live in the Sunshine State, but legal battles clouded Donald Trump's week.

The search was part of an ongoing investigation into whether the former president took classified records from the White House to Mar-a-Lago illegally.

Trump maintains he provided the national archives with presidential records in an "ordinary and routine process."

This is the first time in U.S. history federal agents have searched a former president's private home.

Trump's lawyer says about a dozen boxes of items were removed.

The fight to reveal the former president's tax returns is moving forward, as a federal appeals court has approved a request that allows the House Ways and Means Committee to obtain Trump's tax returns from the IRS.

The decision from the D.C. Circuit Court is a major defeat for Trump, who has spent years trying to prevent the release of his tax information.

However, Trump lawyers could appeal the decision and continue to extend the litigation.

Wednesday: Trump invoked his Fifth Amendment right in a deposition.

Trump invoked his Fifth Amendment right against self-incrimination and refused to answer any questions from New York’s attorney general, during a deposition.

The deposition comes following a three-year civil investigation into the Trump organization's finances.

Prior to the deposition, Trump himself posted about the situation on Truth Social, calling it a "continuation of the greatest witch hunt in U.S. history."

Garland stated the substantial public interest in the case as a reason to unseal the warrant, which would include details about what crimes federal law enforcement officials suspect were committed.

The warrant revealed FBI agents removed 11 sets of classified information from Trump's property, including some marked as top secret.

The documents also confirm the FBI removed classified documents that were only meant to be kept in secure government facilities.

The revelations undercut Trump and his allies’ claims that the search warrant was baseless.

The DOJ is investigating if Trump violated three federal laws, including espionage, obstruction of justice and criminal handling of government records.

Saturday: Trump’s lawyer told the DOJ in June that all classified material was returned.

At least one of Trump's lawyers in June said all classified material at Mar-a-Lago had been returned to the government, according to a report from The New York Times.

That written statement reportedly came after a Justice Department official had stopped by the president's private residence.

The former president is claiming on his social media site that the declassified documents found at Mar-a-Lago were declassified before leaving the White House. He did not provide any details or evidence.

Trump also claims investigators could have had the documents any time they wanted to, but this new reporting suggests investigators were told in June that everything was already handed over.