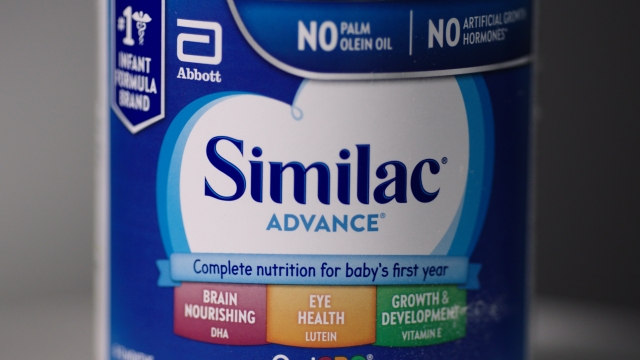 The nation's largest manufacturer of infant formula won lucrative, exclusive government contracts despite criminal convictions for fraud and for illegally pushing products to vulnerable populations, according to records and data reviewed by Newsy.

The contracts are part of the federal Special Supplemental Nutrition Program for Women, Infants, and Children (WIC), which allows states to award a manufacturer the exclusive right to sell baby formula to eligible families within that state.

The federal government says having companies compete for these contracts lowers costs by $1.6 billion — money which allows more needy families to get formula.

However, the exclusive contracts account for a large chunk of the whole market, roughly half of all infant formula sold in the United States. And experts tell Newsy that the contracts themselves equate to handing out intentionally formed, government-backed monopolies in each state's WIC program.  They also can help the winning companies box out the rest of their competition. It means the very program meant to help low-income families ends up threatening the supply chain for everyone.

Dr. Fran Fleming is a researcher at the University of Connecticut's Rudd Center for Food Policy and Health, which studied 10 years of retail data.

"I think that maybe we should rethink this monopoly, because look at where we are today," she said.

Fleming says the winners of WIC's exclusive deals end up with unfair competitive advantages that extend beyond just WIC participants.

"In a study that we've done, we found out that once that contract is put in place, the sales go up over 300% of your product," she continued.

"Any time you are giving exclusivity to a company or a limited number of companies, you give them access to that consumer and you get their eyes, you get their dollars and you get the opportunity to bring them to other products that you have," Fleming said.

The USDA tells Newsy just three companies are winning the exclusive WIC deals for baby formula, across every state and U.S. territory. They're the same three companies that produce 98% of infant formula sold nationally. Newsy has learned the owner of the Sturgis, Michigan, plant at the center of the current shortage — Abbott Laboratories — grew to become the dominant winner of state-issued WIC contracts, even as it battled serious legal troubles.

By 2003, that same division agreed to a $382 million settlement with the Department of Justice after an FBI sting caught the company offering kickbacks to undercover agents and trying to defraud the government. A separate Abbott subsidiary had to pay another $200 million in criminal fines.

Nearly a decade later, in 2012, Abbott paid $1.5 billion after pleading guilty to more criminal and civil violations. This time, the DOJ said Abbott illegally pushed to sell drugs for unapproved uses to elderly dementia patients.   "As this criminal and civil resolution demonstrates, those who put profits ahead of patients will pay a hefty price," said Acting Associate Attorney General Tony West at the time.

But the company's criminal record did not stop more states from awarding Abbott exclusive control of their WIC markets for baby formula.

By 2015, Abbott had 24 exclusive state WIC contracts for infant formula.

According to USDA data just released to Newsy, Abbott now has exclusive control of the WIC market for baby formula in more than half of the states — 34 in all and another 14 more U.S. territories and tribal organizations.

Abbott told Newsy last week it would comment "as quickly as possible" after we asked questions about its criminal background. Nearly a week later, the company had not commented.

Some states that did not award Abbott a WIC contract, like Arkansas, said they were better off when the recall hit earlier this year.

"We're still doing very well," Arkansas Children's Hospital's Dr. Stephen Schexnayder said. "Our supplies are good. We're fortunate to not be affected in that. Our Arkansas contract is with a different manufacturer that was not affected by this formula shortage."

Maintaining its advantage is important to Abbott. A Newsy analysis found the company mentioned the WIC program in three-quarters of its lobbying disclosures between 2018 and 2021. Over that period, the company spent nearly $17 million on federal lobbying on WIC and other issues.

Dr. Peter Lurie is the executive director of the Center for Science in the Public Interest. He is also a former FDA associate commissioner who helped combat shortages in critical pharmaceuticals.

"These companies have every right to go to Capitol Hill. They have a right to try to sell their product. The question is, what's in the public interest? And that's where the government, the legislators and the federal regulatory agencies are supposed to step in," he said. "I think the Federal Trade Commission ought to take a look and see what's been going on in this market, because clearly, although for much of the time these companies have managed to supply the American kids with the formula that they need, it's clearly been at risk for a good long time. And now we've finally seen the consequences."

Lurie is also calling for the FDA to establish a standing committee that identifies suppliers of all critical medical foods and requires them to notify the FDA about expected shortages.

"We should be going to companies who are making these kinds of vulnerable products, asking them if they have a backup plan, having them share that with the agency," Lurie continued. "This means going in with the inspectors deciding how to fix the problem. And it also means beginning to look to alternative suppliers and seeing if they can ramp up their supply chain as well to compensate."

Newsy has learned the FDA is seeking new authority that would require firms to notify the agency if they anticipate significant interruptions to essential foods in the future.

In response to the current shortage, WIC programs are temporarily waiving those exclusive deals, allowing consumers to purchase other formula brands. The federal government has also begun allowing imports of infant formulas from foreign countries to stock shelves. That has not removed the threat of future shortages.

Carrie Cochran contributed to reporting for this story.