Newsy Gets Inside Look At Checkpoint Set Up Outside Lviv, Ukraine 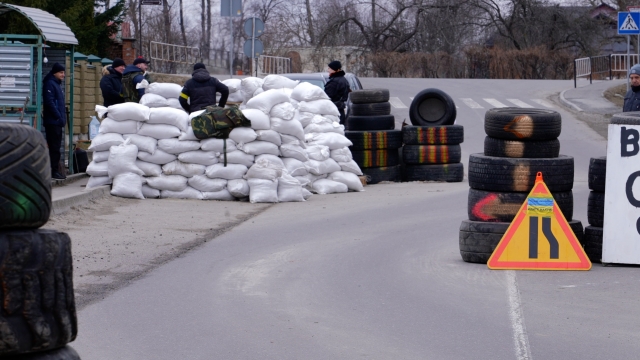 At Lviv's central station, the way out pulls in.  A train to Poland — to safety — for so many is the next leg of a brutal journey. People have come from cities whose names are now burned into the consciousness of the world: Kharkiv, Mariupol, Kyiv.

Many have survived underground for days.

Anastasia Kornienko is a refugee from Kharkiv. She says she has been underground from the first day of the war.

"We were living in the subway, because our house is close to the military college and Russians attacked it," she said.

Kornienko says she escaped by walking through the subway tunnel to the railway station. She says she was told to "go only on wood floor and don't touch the contact line because of the electricity."

She reunited with her mother and younger sister who came from another shelter.

Alona Kornienko says they're continuing on to Poland because their home was destroyed.

"We will find friends, apartments and new jobs," she said.

Hundreds of thousands have come through Lviv. It's the last time their feet will touch Ukrainian soil for who knows how long.

Defending that soil is now up to those who are staying.

"We have only one request: To close the sky above Ukraine," checkpoint volunteer Ihor Klimkosvsky said.

While he hopes for Western help up above — a prospect that's growing less likely by the day — Klimkosvsky is manning a checkpoint, on guard for enemy infiltrators.

Taking photos or video of checkpoints is strictly prohibited. Newsy received special permission to be there though, on a road connecting Lviv to the country's south.

Russian forces remained several hundred miles away, but if they came to the checkpoint, Klimkosvsky says: "It would be a one-way ticket."

"Here at this checkpoint, we are looking for Russian spies," Klimkosvsky continued. "We're here to find them and interfere with their plans."

The concern is that Russian agents may now be identifying targets for airstrikes. Russian saboteurs have also damaged rail lines elsewhere in Ukraine.

NEWSY'S JASON BELLINI: How do you know if someone is a Russian spy or not?

IHOR KLIMKOSVSKY: We have lists with information about the spies, with their first and last names and photos.

BELLINI: And if you find a spy, what are you supposed to do?

Taking out spies is one way to protect ground targets. Another way, which doesn't require a gun, is camouflage.

Vasyl Markevych is from Belarus, which is Russian President Vladimir Putin's most important regional ally in this war. He's been a political refugee in Poland since 2020.

Before the war broke out, Markevych decided to go to Ukraine to help.

"There is aggression from Belarus territory," he said. "Not all Belarus people are against Ukraine. Actually, I have a lot of friends — Belarusian friends — here in Lviv and we all decided to help Ukrainian people."

BELLINI: How did all these young people know about this?

VASYL MARKEVYCH: There is a lot of chats in telegram. Volunteer chats.

Maria Ivanchuk is a refugee from Odessa, which is widely expected to be Putin's next target. She escaped last week and has been in Lviv more than a week.

"Who else, if not us? This is a time when we should just support each other," she said. "When we should help each other — help our army to win this war. I don't even know why wars still exist."

While they wait for the battle to come west, the people of Lviv pray for those fighting in the east.

At a mass for Ukrainian veterans of wars past and present, a priest asks God to bring peace. A collection bowl is being used to help pay for the war. And out in the cold, there's music to rally the spirit.

Someone put a piano outside to give the refugees, who are patiently waiting hours, something to listen to.

One elderly woman sang a patriotic song. The lyrics say: "Ukraine, my dear country, our love is strong like never it was."

The 82–year-old doctor is newly arrived from Kyiv and traveling alone. Before she darted off — too quickly for Newsy to get her name — she told us she won't be riding the train out to Poland.

"Our people will not capitulate," she said. "I won't leave. This is my country. This is my land."