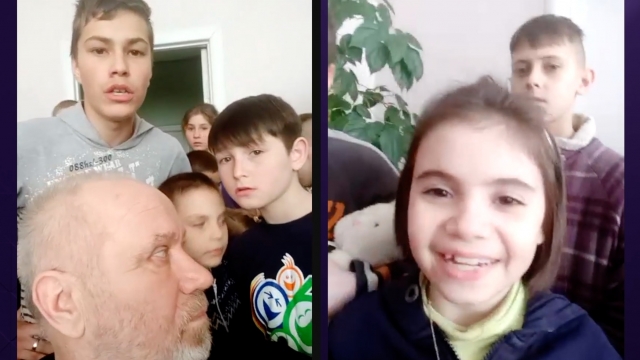 SMS
Newsy Follows Up With Orphanage In Ukrainian City Occupied By Troops
By Jason Bellini
By Jason Bellini
March 11, 2022
Vladimir Sagaidak says with nothing coming in or out, the people of Kherson — and the orphans — are running out of food.

In the first days of the war, Newsy talked with Vladimir Sagaidak and the 50 young orphans he is helping survive.

With communications going in and out in Kherson — the first Ukrainian city controlled and occupied by the Russians — it has been hard to get in touch.

But finally, Newsy reached Sagaidak again. They've been sheltering, all 50 of them, sometimes in a basement, for two weeks now.

We asked how they are coping after two weeks locked inside, with windows closed and shades drawn.

A 16-year-old named Denis — one of the older boys at the orphanage — spoke for the group.

"Currently we are occupied by Russians," he said. "We see how airplanes fly over our heads. We hear explosions, usually at night or early morning. Helicopters and fighter aircraft fly really close to us. We also saw tanks and armored vehicles, but we haven't seen Russian soldiers personally."

NEWSY'S JASON BELLINI: How are the younger children doing during this? It must be very difficult for all of you. But for the younger ones, who may not understand what's happening, what's it like for them?

DENIS: The older children help the younger ones. They try to focus their attention on activities, games, cartoons. But all of them, including the younger ones, know what is happening in their country.

BELLINI: Is there anything you'd like to say to Americans and other people around the world who are watching this right now?

DENIS: First of all, I would like to thank the U.S. for supporting Ukraine. The States already gave weapons, financial support, humanitarian aid. Right now, we really need humanitarian aid and I ask for all who could help us — we need a green corridor. We are blocked. We are surrounded. We can't get food or medicine. We hope that the U.S. could find diplomatic ways to provide a humanitarian corridor to Kherson.

All roads in and out of Kherson are now blocked.

With nothing coming in or out, the people of this city — and the orphans — are running out of food.

BELLINI: There are reports that there's only one week of food left in your city. Do you have enough food?

VLADIMIR SAGAIDAK: We have food for 10-14 days. Kherson is surrounded and there's no way to bring into the city food or medicine.

But without a way out, Sagaidak does not know how they will survive.

He says that charities from several countries have offered to send buses to get the orphans out.

While they wait for a way out — and with no parents to look out for them — they're relying on Sagaidak and each other. They're trying to keep busy and trying to keep their spirits up. 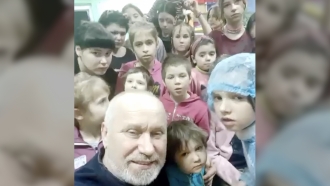