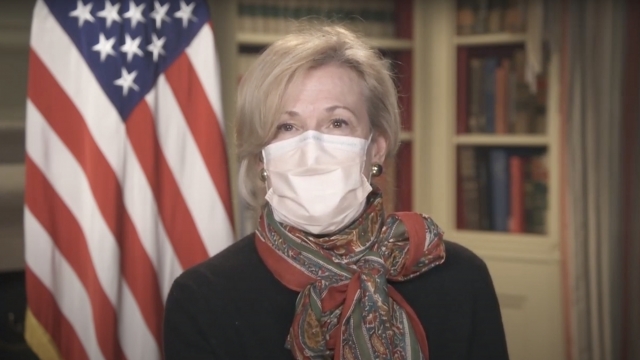 White House coronavirus task force coordinator Dr. Deborah Birx has done it all. But in an exclusive interview with Newsy, she says she's just about to call it quits.

"I've worked since 1980 in the federal government, first through the military, then through HHS and then detailed to the State Department and detailed here," said Birx.

She says she's willing to work with the Biden transition as long as she's needed.

"I will be helpful in any role that people think I can be helpful in, and then I will retire. ... I only came into the White House to ensure that our COVID response could utilize whatever information I had from confronting epidemics around the globe," said Birx.

She says the pandemic has affected us all — including her own family.

"My parents stopped eating and drinking because they were so depressed. This is what's happening in households across America. And we're going to have to take time to ensure that not only they get vaccinated, but they can recover from the trauma of the last 10 months," Birx said.

Respected throughout her career, she's faced criticism since joining the coronavirus taskforce. And for all her guidance to the nation, it was her look as President Trump floated the idea of injecting disinfectant and using light to combat COVID-19 that became a defining moment.

She says this last week has been especially hard after reports of her family's recent travel to Delaware after she previously warned Americans to stay home.

"We never visited anyone, we never had anyone into the household. It was the same situation [as] if we had been here at home, but because of the perception it created, we obviously will not do that through any of the holiday seasons," Birx explained.

"This experience has been a bit overwhelming. It's been very difficult on my family. I think what was done in the last week to my family, you know, they didn't choose this for me. They've tried to be supportive, but to drag my family into this," she continued.

Newsy reached out to the White House for clarification on her comments; they say there is no precise date for the retirement but that she does plan to help with the Biden transition.