Hundreds Of Newspapers To Trump: 'We Are Not The Enemy' 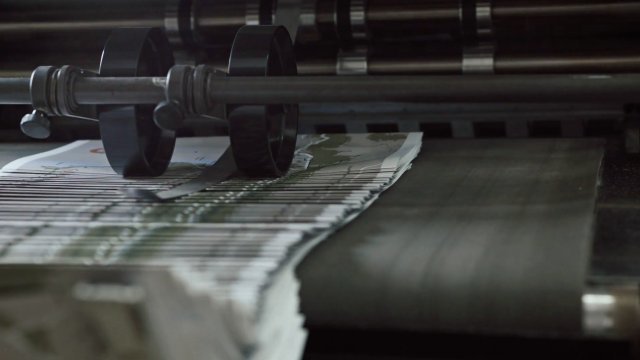 More than 350 newspapers ran op-eds rebuking President Trump's attacks on the press, but a new poll shows many Americans may agree with him.

"We are not the enemy; We are the people."

"Hate the press all you want — we'll keep reporting."

These types of headlines could be read from coast to coast on Thursday as more than 350 newspapers took part in a collective effort to stand up to President Donald Trump's anti-media rhetoric.

The project was spearheaded by The Boston Globe's editorial staff to show readers that Trump's ramped-up attacks on the press are "unacceptable."

Joining the effort, The New York Times' editorial board writes: "Criticizing the news media — for underplaying or overplaying stories, for getting something wrong — is entirely right. ... But insisting that truths you don’t like are 'fake news' is dangerous to the lifeblood of democracy. And calling journalists the 'enemy of the people' is dangerous, period."

Local News Is Shrinking â What Happens When The Watchdogs Disappear?

Judging by the considerable number of news outlets that joined the Globe's call to action, there's no denying that the project was successful. But it's unclear if it will change the minds of those who already distrust the media.

One Politico writer argues the collective effort "is sure to backfire" and provide Trump with "circumstantial evidence of the existence of a national press cabal that has been convened solely to oppose him."

As for Trump supporters, more and more of them seem to agree with his assertion that the media is "the enemy of the people."

As many as 51 percent of surveyed Republicans say that's how they view the media, while 36 percent believe it is an important part of democracy. That's according to a Quinnipiac poll released this week.

The poll also shows that 44 percent of American voters are concerned that Trump’s attacks on the media will lead to violence against journalists. It's worth noting that concern levels are much lower among Republicans.

So far in 2018, 31 journalists have been physically attacked in the U.S., according to the U.S. Press Freedom Tracker. That includes five employees of the Capital Gazette who were killed in June. The suspect in that shooting, who's been charged with murder, told police he had a grudge against the newspaper.