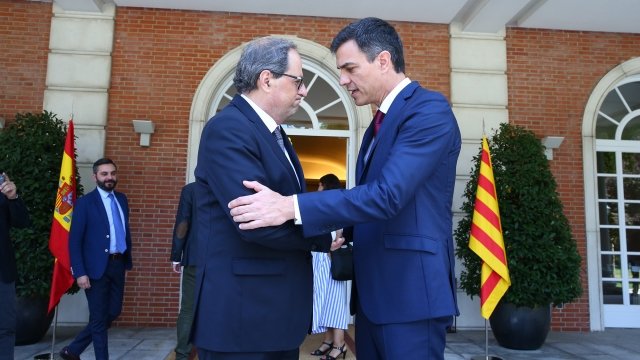 The new leaders of Spain and Catalonia have agreed to reopen bilateral talks in a bid to ease tensions between the two governments.

Spanish Prime Minister Pedro Sanchez and Catalan President Quim Torra met for two and a half hours on Monday in Madrid. Sanchez called the meeting a "starting point" for getting Spain and Catalonia on the same page.

Sanchez and Torra agreed on certain things, like reactivating the bilateral commission between the State and the Generalitat — which hasn't met since 2011.

But they disagreed on the idea that Catalonia become independent. Sanchez reportedly reminded the Catalan leader that self-determination isn't allowed under the Spanish constitution.

The two leaders have reportedly agreed to meet again later this year in Barcelona.