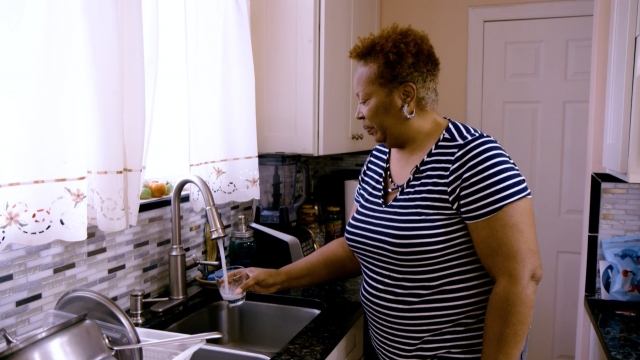 As construction workers dig into another street in Newark, city residents breathe a sigh of relief, knowing that this massive construction project will bring a healthier future for the next generation.

To tackle the problem, most of the dangerous lead-lined pipes that bring water to homes and businesses have been replaced with copper pipes.

A study in Newark conducted by the state found lead levels to be nearly three times what federal rules deem to be safe.

Newark Education Workers Caucus chairperson Yvette Jordan has lived in Newark for over 30 years. She was shocked at the lead levels in Newark's water.

"I was flabbergasted. I was like... I was dumbfounded," she said. "We were ignorant. We were naive. And based on that naivety, I think the city, at the time, just said, 'OK, we're not saying anything about these lead exceedances.' And that was a problem."

At first, Newark — New Jersey's largest city — was denying the problem to its residents.

"There is no safe level of lead," he said. "What we've seen is the city going from denying they had an issue really from being a laggard to being a leader. They have now turned around and they are leading the charge to replace all their lead pipes very quickly, much faster than other cities."

In three years, 22,000 water service lines have been replaced. That amount of work was projected to take 10 years.

Kareem Adeem has directed the progress of the city's pipe replacement.

"Twenty eight thousand five hundred homes that we visited and we removed 22,345 lead service lines as of Friday. Those other houses didn't need a replacement," he said. "We want to make sure we did our due diligence and ease the anxiety of homeowners or tenants or residents and letting them know that they didn't have a lead service line by eventually going in and excavating a test pit to show them that they didn't have that service."

Crews can take up to five hours replacing a single pipeline. First, they dig holes to get them, then determine the best way to remove them based on wear. Some of the pipes are a century old. Crews work on about 120 sites a day throughout the city.

Newark's progress is now seen by some as a redemption for Mayor Ras Baraka. In 2018, Baraka faced criticism after the NRDC sued, saying the city had failed to monitor lead levels in its pipes and that it had minimized the crisis to the community. At the time, the mayor was running for reelection and Newark was fighting to become home to Amazon's headquarters. Yvette Jordan joined the NRDC's lawsuit.

"I think all of the confluence of those events was affecting how our mayor reacted. And that non reaction is what really made us angry," Jordan said.

Adeem says the biggest lesson learned is: "showing that with the political will and the funding that we can remove lead service lines to be the transparency like we're here today."

He continued to say, "That national model can help other cities like Newark by just being transparent about what we went through, lessons learned. We're sharing that information throughout the country."

The consumption of lead is harmful to all, but can be extremely dangerous to children's health.

Olson says, "Lead is a very dangerous poison to the brains of developing children, especially so it can actually cause lower IQ. It can cause them to have problems with learning. It can cause problems with control of their behavior. It's even been linked to things like criminal behavior later in life."

For adult health, Olsen says, "It can affect their kidneys and also has been linked to blood pressure problems and cardiovascular disease. Even a lot of deaths from cardiovascular disease in adults, so it's a double whammy at both hits the young children even in the mother's womb, and it hits adults."

The NRDC estimates about 12 million lead service lines in the U.S., half of the states in the country, don't track the lead in their territories. A new NRDC analysis of the most recent Environmental Protection Agency data shows that between January 1, 2018 and December 31, 2020, 186 million people — a staggering 56% of the country's population — used drinking water systems with lead levels exceeding the level recommended by the American Academy of Pediatrics.

The way lead gets into tap water is usually through service lines. When water leaves the treatment plant, it travels through water mains called service lines. Most homes have lead pipes that connect to service lines. If the water is not treated, it eats away the inside of the pipe. That causes flaking of the material. And ultimately the lead particles dissolve into the drinking water.

"You have to understand the national model is when all of the people come together," Jordan said. "And it wasn't until the community started rising up and saying, we need this, that the city was addressing it."